Anderson will continue to perform well in all kinds of conditions, feels Ganesha 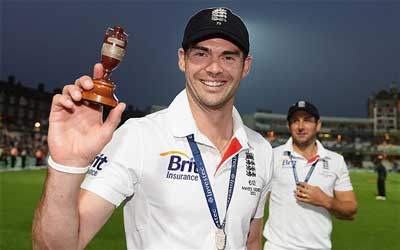 England’s medium-fast swing bowler who began his international career at the age of 20, James Anderson has more than fulfilled his potential, so that today, at 33, he is spoken of in the same breath as Ian Botham, one of England’s greatest. Anderson’s talents have been particularly apparent in Test cricket where his command of swing bowling, especially on his home grounds, has been the stuff of artistry, bearing comparison with any swing bowler in any age. He has been an integral part of three triumphant Ashes campaigns. He has proven his mettle in all three formats of the game. He has 413 wickets from 107 Test matches, and 269 wickets from 194 ODIs. In the ongoing Ashes series, Anderson has been the toughest cookie for the Australians, picking up 6/47 in the third Test.

1) Anderson seems to be going through a very bright phase, but what are the planetary factors that are favourable for him?
2) Will he be able to deliver consistently solid performance in the coming year?
3) Do his Planets indicate that he will become one of the greatest contemporary bowlers?
Ganesha wishes good luck to the James Michael Anderson.

With Ganesha’s Grace,
Rantidev A. Upadhyay,
The GaneshaSpeaks Team.