Who Will Win, Iceland Vs Croatia, In 40th FIFA World Cup Match 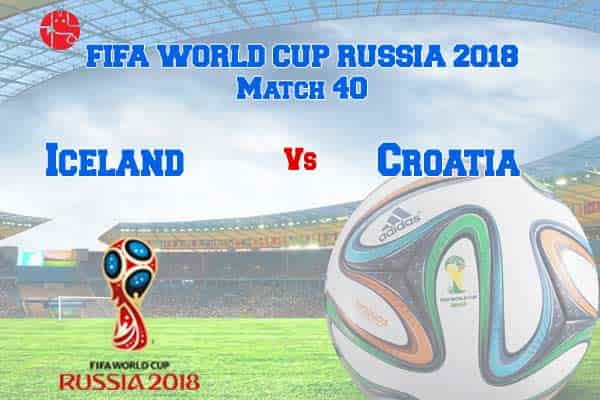 There is chaos in the Group D of the FIFA World Cup 2018, as three teams are to decide their fate to qualify for the next round of the football World Cup games. The only team that has qualified from the group is Croatia. The rest three teams, namely Iceland, Nigeria, and Argentina are yet to fix their place in the top 16 which will depend on the rest of the intra-group matches that are yet to be played. In this match, Iceland not just needs a win to get to the top 16, but their qualification also depends on the result that comes out between Argentina and Nigeria. That is, if Nigeria wins Iceland will go out and if Argentina draws or wins the match, it will all come down to other factors like the goal difference, etc. So, this match is very crucial for all the teams in the group.

Iceland Vs Coatia Match Prediction: About The Top Players’ Performance

As per their previous match during the Russia 2018 qualifiers, Iceland had won against Croatia with a 1-0 score. Iceland has players like Sverrir Ingason, Ragnar Sigurdsson and Bjorn Sigurdarson who will feel at home as they play for Rostov club. On the other hand, Croatian team is in great form and have won all their group matches with players like Ivan Rakitic, Luka Modric, Mario Mandzukic and Andrej Kramaric. This is going to be an enthralling match which will decide who qualifies for the next round of the football World Cup 2018.

Who Will Win Today, Iceland or Croatia? Ganesha Has The Answer

According to the astrological prediction, Croatia will either win this match or it may end in a draw. In both the cases, Iceland may not qualify for the quarter-finals as they at least need a win to keep their hopes alive for this FIFA 2018. Croatia, indirectly may also influence the game and play according to who they want with them in the qualifying rounds, though both of them will try their best to win the game in the first place.