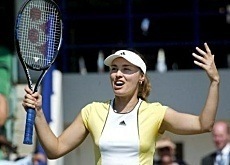 In 2006, the return of Martina Hingis to full-time tennis was greeted with surprise and cheer and the ”Swiss Miss” managed to silence her doubters with a run of successful results and managed to end the year as number seven in the world following victories in Italy and India.

Then after almost two years back into the sport which brought her fame and fortune, and Hingis’ illustrious career has come to a sad end after testing positive for cocaine at this year’s Wimbledon.

She has Sun debilitated conjunct Saturn and Pluto. The conjunction blends the energies of these two arch rival planets together. The Sun is youthful, full of energy and ego, while Saturn is the older member of the solar system. People who are born with the Sun and Saturn close together are generally serious and focused but it also creates tremendous uncertainties and struggle in life. Whenever this conjunction comes under the evil transit influence, it spoils the whole atmosphere for the individual and cause tremendous anxiety. The transiting Rahu and Saturn forming hard aspects to natal Sun-Saturn conjunction in her chart are damaging her reputation and tarnishing her public image.

The five-time Grand Slam champion insisted she had never taken drugs and ”felt 100% innocent” but it will be tough for her to prove her innocence considering the present planetary influence. The period between August 2009 and March 2011 will be highly stressful for the former glamorous tennis star.