Who can forget the gritty knock of 97 in 122 balls in the final of the ICC Cricket World Cup of 2011 by Gautam Gambhir? He played gem of an innings which helped India lift the World Cup after a gap of decades. A classy left handed batsman who has opened the innings for Indian cricket team till recently, Gautam Gambhir has played a pivotal role in shaping up the Indian batting attack and battering the opposition bowling attack to pieces. Be it any form of the game, Test cricket or the shortest Twenty 20 version of the game, Gautam Gambhir has proved his mettle in batting and has scripted many victories for the Indian cricket team in both home and abroad. His inspiring leadership qualities have come to the fore in the Indian Premier League (IPL) where he is the Capitan of the Kolkata Knight Riders team and helped them to achieve the ultimate glory by winning the 2012 edition of IPL. He was picked by the Kolkata Knight Riders for a price tag of US $725,000 a year, a deal that made him the most expensive player in the history of the IPL. However, due to a recent lean patch and a dip in form, Gauti has been dropped from the national side. We are sure that he will bounce back and regain his place of pride in the Indian cricket team. But, what do the stars say? 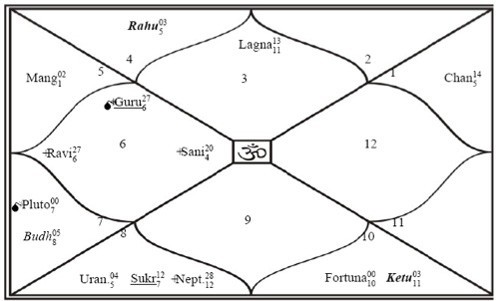 We have examined the horoscope/ Natal Chart of Gautam Gambhir, the prolific Indian cricketer to decipher what the planets have in store for him in the coming times. Here is what Ganesha has to say about our very own Gautam Gambhir.

The 3rd House is the House of enterprise, dexterity and curiosity. Mars is placed in the 3rd House in Gambhir’s Natal chart. It gives him the extraordinary quality of getting success through his own hard work and self effort. Gautam Gambhir has his 3rd House’s Lord Sun placed in the 4th House along with the Yogakaraka Saturn and the 10th House’s Lord Jupiter. Sun is also Atmakaraka, and becomes powerful by being Vargottama. The Sun-Saturn-Jupiter combination in the 4th House is forming a powerful Rajayoga, which has earned him fame and recognition. In fact, the Sun Mahadasha has benefited his career immensely.

The 6th House, which is an Upachaya House also plays an important role in the life of a sportsman, because it is the house of competition. A strong 6th House Lord in the 3rd House can be a boon for any sports-person. Gauti has his 6th House’s Lord Mars in the 3rd House, which becomes strong by being in its own Navmansa. The Moon Mahadasha-Mars Bhukti (between July 2007 and February 2008) was a glorious period for him, and this was the very time when Gautam performed very well, and became India’s top run scorer.

Gambhir is currently under the influence of Moon Mahadasha and Mercury Bhukti. His Ascendant’s Lord Mercury is retrograde in the 5th House. The transiting Saturn and Rahu are passing through the 5th House over the Natal Mercury, and are also aspecting the Natal Moon. Due to such difficult planetary influences, he has been dropped from the national team. However, it is not an end to his career – it is not all over yet for Gautam Gambhir. A lot of cricket is still left in him, and planets tell that he will bounce back after June 2013, when the transiting Jupiter will enter the Gemini Sign. So, we can expect him to perform well for India in the future in the shorter versions of the game as well as in the Test cricket.

We wish Gautam Gambhir all the luck!