Once again it has been proved that GaneshaSpeaks.com has an inseparable bond with Accuracy!

Once again it has been proved that GaneshaSpeaks.com has an inseparable bond with Accuracy! 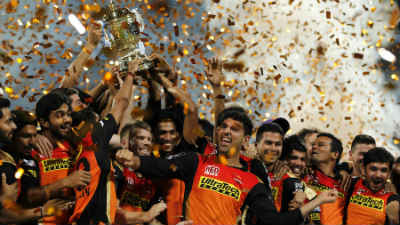 Once again Ganesha has struck the bull’s eye and this shows that GaneshaSpeaks.com has an inseparable bond with Accuracy!

Though all the bets were already placed on the Virat Kohli led and De Villiers-Gayle-Watson powered Royal Challengers Bangalore to emerge as the supreme victors, we at GaneshaSpeaks.com had clearly predicted that it will be the resurgent Sunrisers Hyderabad that will get the top glory in the electrifying cricketing tournament – Indian Premier League, Season 9! Yes, indeed Ganesha Got It Right!

The Exclusive Ganesha Got It Right (#GGIR) Poster: 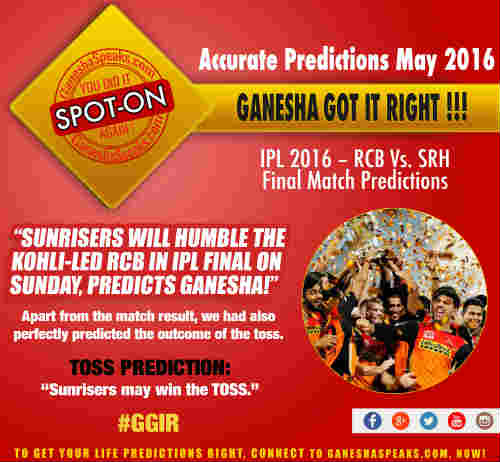 This is what we had predicted:

“Sunrisers will humble the Kohli-led RCB in IPL final on Sunday, predicts Ganesha!”

Though we had precisely predicted the final outcome of the match itself, we had even perfectly predicted the result of the toss, as well as the names of the key players:

To get an idea of the likely events in your daily life, avail the personalised Star Guide.

To get accurate Life Predictions, connect to www.GaneshaSpeaks.com, Now!