Dipa Karmakar may win a Bronze in the Rio Olympics, feels Ganesha 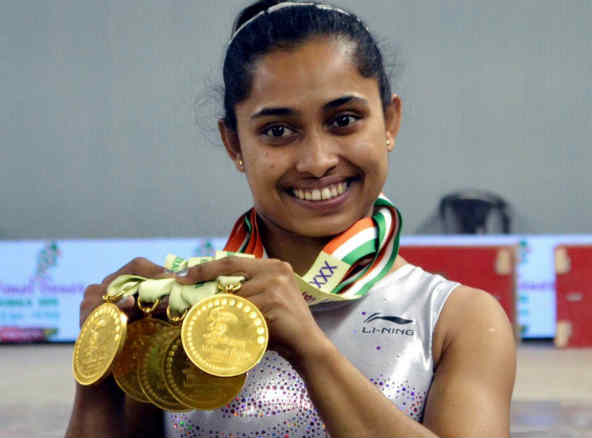 Probably the finest woman gymnast ever produced by India, 23-year-old Dipa Karmakar from Tripura is a strong medal prospect for the country at the ongoing Rio Olympic Games. Dipa shot into the limelight when she won a Bronze medal at the Commonwealth Games in 2014 to become the first Indian female gymnast to do so. She also won a bronze at the Asian Gymnastics Championships. And now, she has become the first female Indian gymnast ever to secure an Olympic berth. Ganesha takes a look at her Horoscope and predicts that it will be tough for her to meet the expectations of her countrymen, but she may win a Bronze medal.
Dipa Karmakar
Date of Birth: 9 August, 1993
Place of Birth: Agartala
Time of Birth: Unknown
Solar Chart

Reason for her strong courage and determination:
The conjunction of  Jupiter and Mars makes Dipa Karmakar very optimistic, determined, and courageous. Her correction ability, matureness and a great temperament can make her a very successful gymnast. Most of the time  her positive thinking attracts many positive things in her life, so the natural optimism benefits her in many ways.
Her daring could make all the difference:
Moon in the Sign of Mars and Venus in the 3rd House from the Moon makes her able to take a daring action and show her courage and wholehearted dedication towards her aim. Saturn's influence on Moon indicates a great sense of purpose and discipline to be the achiever.
Are you confused about the right career field or the business prospects for you? Then our exclusive personalised report Suitable Career/Business Field For You is just the right solution! Order now to get a special 60% off!
Her task is Herculean, but a Bronze is on the cards:
The transiting Jupiter has helped her significantly to achieve the glory. The transiting Jupiter will be moving over the Natal Mars and Jupiter on the final day of her performance. But, the transiting Saturn may cause problems and are likely to restrict her progress. The conjunction of Venus-Rahu and Mercury will remain beneficial but the raw force of Mars can be a disruptive force. The transiting Moon will help her to showcase her abilities with much more control and elegance. So, her performance will be better in the finals. Overall planetary influences suggest that she will be able to improve her ranking and may be able to move closer to at least Bronze medal. Though it will be a Herculean task for her to meet the expectations.
With Ganesha's Grace,
Tanmay K. Thakar
The GaneshaSpeaks.com Team
Share