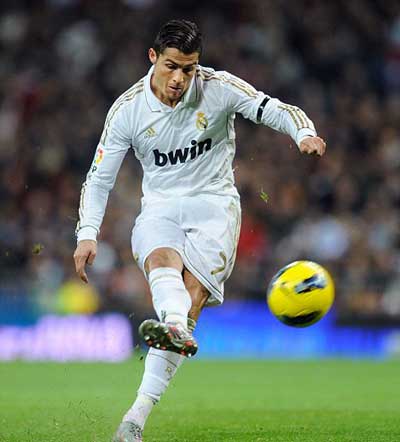 Who would have imagined that a baby boy born to Maria Dolores dos Santos Aveiro, a cook, and José Dinis Aveiro, a municipal gardener, on the 5th of February, 1985, in Portugal, will one day go on to become one of the most famous and wonderful football players ever in the history of the game! Cristiano Ronaldo is a real marvel and a genius that the game of football has ever produced. From the inimitable style of play to the exceptional skills that he possesses and from the eccentric histrionics on the field to his unmatchable charm that can go any girl go weak in the knees, Ronaldo has it all and that is what makes him such a hugely popular footballer in the world. He is so famous, that even a small kid in any part of the world would be knowing who Ronaldo is! Playing for the super-rich Spanish club- Real Madrid and perfroming exceedingly well as the forward and leading his Portugese National side heroically. Ronaldo has won a lot of acclaim all over and is one of the highest paid footballers in the world. As he is on high now as a new Galaxy has been named after him, even as his fans are discussing about his future prospects and possibilities, the star footballer continues to be the one of the greatest goal-scoring machine! Ganesha takes a look at his Surya Kundli and analyzes what the future has in store for the Left-Winger. Let's have a look....
Cristiano Ronaldo
Date of Birth :-   February 5, 1985
Time of Birth :-  Unknown
Place of Birth :-  Santo António, Portugal

Astrological Analysis of Cristiano Ronaldo's Surya Kundli
Astrological Predictions:
Jupiter is transiting through his 7th House and is passing over his Natal Moon and forming an opposition aspect on his Natal Sun, Jupiter and Mercury and also aspecting his Natal Saturn and the Natal Mars and Venus with the 5th and 9th aspect. This indicates that the current phase, escpecially till the 14th of July this year is a very auspicious time for him.
Further progress in career and increase in popularity during this period is indicated. His performances will win a lot of admiration from fans across the world. His stature in the world of Football will also increase.
He may even get new offers for endorsement of various brands and professional assignments as the transiting Jupiter is in his favour.
A very good time for the matters of the heart. Cristiano may even find a beautiful lady as his new partner!
But as Saturn is transiting over his Natal Saturn and 11th House, aspecting the 5th House, 8th House and Ascendant, he will have to remain focused and practical. This may also cause some unnecessary problems for him and some detractors may try to speak against him. It may cause some problems, but they will be tackled well by him as he tackles the ball in a match.
He should try not to exert himself much as the Rahu and Ketu transiting in the 9th House and 3rd  House axis may not allow his luck to favour him completely. Moreover he should be alert against any sort of unexpected developments.
On 14th July, 2015, Jupiter will be moving in to his 8th House, wherein he is going to stay for approximately 13 Months, which will not be a very favourable period for him.
Professionally, though a sudden sluggish phase is indicated in this period, wealth and matters of finance shall be good till 31st of January, 2016. He may even purchase a new property after 14th July, 2015.
He should also be very careful about his health in this period. The health issues may even affect his performances.
Ganesha wishes Ronaldo a fantastic year ahead and lots of success in future!
With Ganesha's Grace
Aaditya Sain
The GaneshaSpeaks.com Team
Share