While his former Ranji captain Sitanshu Kotak failed to make it to the Indian team, despite sterling performances throughout his career, Cheteshwar Pujara has broken into the big league at the age of 25. Pujara is every bit as determined and technically as perfect as his ex-Saurashtra captain, and, of course, a shade luckier. Also, this gifted batsman has more shots around the wicket in his repertoire, and in keeping with the demands of modern day cricket, a little more aggression. His solid technique with the bat, right temperament and hunger to score big have helped him earn the ICC ‘Emerging Player of the Year- 2013’ title. Expectations from the Rajkot lad are, thus, bound to be very high in the upcoming Test series against South Africa starting on December 18.

Ganesha, with the help of Vedic astrology, takes a look at his prospects in the year ahead. 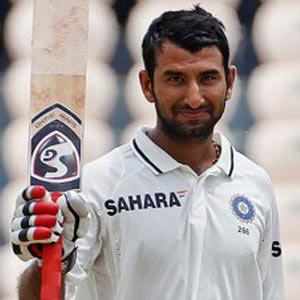 Ganesha says…
The talented young batsman may inspire even the opposition with his fantastic attitude on and off the field during 2014. He is likely to demoralize the bowlers with his solid batting, outstanding footwork and great concentration power during the first half of the year. But at the same time, the Saturn-Rahu conjunction in Libra may hamper his progress to some extent. There are chances that he may take a few wrong decisions at crucial junctures. He is also likely to face a few hurdles while trying to achieve his personal goals as a batsman during the fist quarter of the year 2014.

However, during the later half of 2014, he will help Team India win matches with his scintillating performances. He will consolidate his position in team India in the year 2014. But he will have to be careful specifically regarding his health. Some old health problems and fitness issues may resurface during the year.

Cheteshwar Pujara proves in more ways than one that persistence is a quality that helps you achieve the unachievable, specifically when it comes to your career. If you are facing any issues related to your career, you should try our Career Ask a Question service or Talk to an Astrologer at Ganeshaspeaks.com to overcome the hurdles and achieve success.