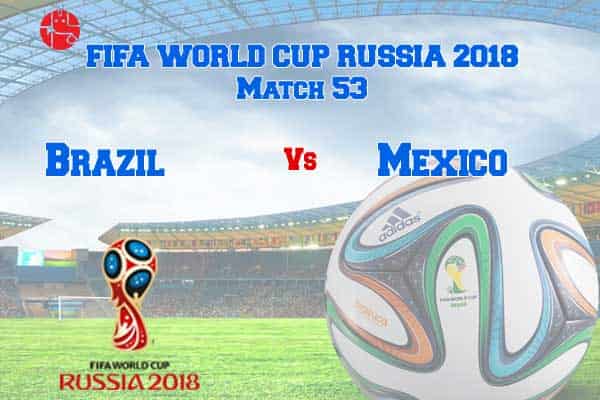 The 53rd match of the FIFA World Cup 2018 is between these two American teams, one belonging to the South and the latter to the Central part of the continent. These Top 16 group matches lead to the quarter-finals of the World Cup held in Russia. Two great teams who are competing against each other to reach the next round of the World Cup. Brazil has won two matches out of the three where one was a draw in their first match against Switzerland. On the other hand, Mexico won two out of the three matches where they defeated Germany in their first match of the group and had lost to Sweden with a score of 3-0 as well. So, it is going to be a tough match to witness. Read what Ganesha has predicted:

Both these teams are in good form, especially Brazil who still have not lost any match yet. Mexico has players like Hirving Lozano, Carlos Veta, Javier Hernandez, Andres Guardado, Hugo Ayala, Hector Moreno, Miguel Layun, Jesus Corona and Oribe Peralta. Brazil also has amazing players like Thiago Silva, Miranda, Marcelo, Casemiro, Philippe Coutinho, Paulinho, Willian, Gabriel Jesus and Neymar. It will be interesting to see how the player formation and the team lineup changes on the day of the match as well.

Who Will Win Today, Brazil or Mexico? Ganesha Predicts The Outcome

As per our prediction using astrology, it is predicted that Brazil will win this game against Mexico. Both the teams are in great form, but Brazil who is yet unbeaten in this tournament will continue this streak and also win this match against Mexico to reach the next round of the quarter-finals of the FIFA World Cup 2018.