Apart from some fitness concerns, nothing can stop Ashish Nehra – the man on song, says Ganesha!

Apart from some fitness concerns, nothing can stop Ashish Nehra – the man on song, says Ganesha! 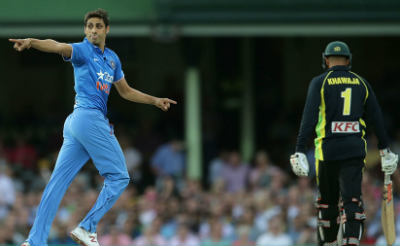 Ashish Diwansingh Nehra – the man who is on a comeback to the national squad after a long time, is probably having a ball currently! Being the senior-most member of the Indian T20 side, Nehra is enjoying great importance because of his immense experience and skill with the ball! He has been troubling the batsmen with his stump-line bowling and smart variations in pace. The Delhi pacer has probably been the most economical and effective pacers for India in this edition of the T20 World Cup. The way MS Dhoni lapped up and lifted Nehra jubilantly after India won the last-ball thriller against Bangladesh, speaks volume about his influence in the team and explains the Captain Cool’s acknowledgment of the invaluable inputs that the seamer may have given to rookie Hardik Pandya during the death hour. All things said and done, what do the planets indicate about the path ahead for Ashish Nehra? Read on to get the answers…

[Owing to the unavailability of credible birth-time, the analysis and predictions have been done on the basis of the Solar Chart/ Surya Kundli with the help of Nehra’s birth-date and birth-place only.]

1) How has he been able to make such a good comeback to the national side? What could be the favorable planetary influences?

2) Will this stint of his last long?

3) How will the path ahead be for him? Are there any fitness problems indicated?