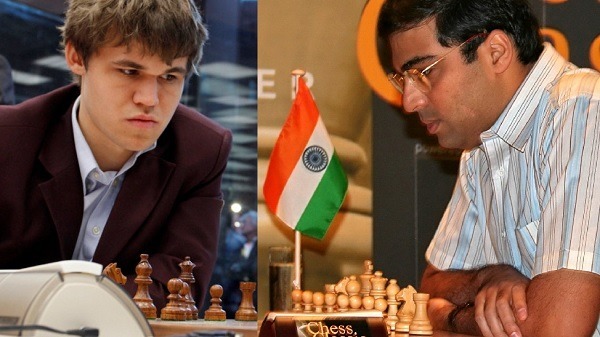 The stage is set! The excitement surrounding the world championship match between World #1 chess player, Magnus Carlsen (22), and reigning World Champion, Vishwanathan Anand (43), has reached its peak. Chess enthusiasts all around the world have been waiting for the historical match between these two giants of the game, and the wait is finally over. Carlsen has been the world number one for 21 consecutive rating lists, however, his lack of experience in playing World title matches may work in Anand’s favour. But Carlsen’s never-say-die attitude will be his strength, experts believe. No wonder, there is no clear favourite to win this prestigious title.

However, Ganesha can predict the possible outcome of this much-awaited match. The astro-analysis of the Opening Ceremony Chart and planetary positions affecting Anand and Carlsen in the coming month will give us a sneak peek into the future. Read on!

*Magnus Carlsen’s birth time is not available. The astro-analysis is done on the basis of the planetary positions in his Surya Kundali.

Prediction:
Retrograde and severely afflicted Mercury during the Opening Ceremony of the World Chess Championship chart suggests one of the most exciting and unpredictable tournaments between the Anand and Carlsen. The over emphasized Ascendant in Anand’s chart indicates a very tough test for the defending champion. He may remain defensive in his approach till 11th November. On the other hand, Mars Trine Natal Moon and Mercury-Saturn conjunction in Carlsen’s chart indicate that he may try to dominate and aim to take early lead. However, Vishy’s meticulous moves may not allow him to break free. The matches between 12th November and 19th November will be extremely important in the context of the tournament. Carlsen would be highly motivated to prove his dominance. He may be able to find a way ahead which might frustrate Anand. However, the five-time World Champion, Vishwanathan Anand, may learn from his mistakes and secure some important points. It is to be noted that Anand will be under the influence of Saturn Bhukti from 24th November. Besides, Yoga Karak Saturn is debilitated and retrograde in the 7th House, in his Kundali. In this context, Game 11 and 12 will be crucial for him.

There is a strong possibility that the final result of the World Championship 2013 title will be decided by a tie-breaker. In all likelihood, Vishwanathan Anand will be able to retain his title.