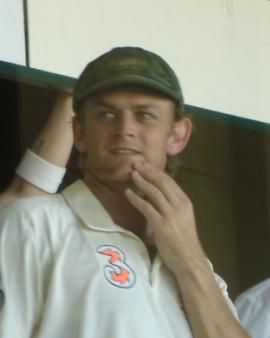 Australian player Adam Gilchrist was born on 14th November 1971 in Australia with Scorpio Sun sign. Thus, he is aggressive. He is left-handed batsman and effective wicket-keeper, combining the two roles for the Australian national team. He is considered to be one of the best wicket-keeper-batsmen in the history of the game. His strike rate is amongst the highest in the history of both One-day and Test cricket and he currently holds the record for the second fastest century in Test match cricket.

There is trine aspect between Mars and Sun in his Sun chart. As he is born with this graceful aspect, he has powerful stores of energy that he can draw while playing. Hence he responds to problems or challenges with a spirited and enthusiastic confidence that is admirable and a positive point. He is naturally competitive, and this trait is generally well-received by others simply because it is unforced, unaffected, and sincere. He is truly believed in fair play. Due to having this aspect he has good physical vitality. In his Sun chart, there is powerful conjunction between Jupiter, Venus as well as Mercury which give him self-motivation. Group of three planets indicates harmonious situation in general in his life and also denotes tremendous success of playing. He may possess foresight for numerous enterprising ideas.

Rahu and Ketu are located in Kendra giving prosperity and wining situation in general. Presently transiting Jupiter is passing over the Natal Jupiter which is beneficial for him. Mars is also square aspect with transiting Jupiter. Additionally 5th house of sports is occupied by Mars. All these factors show his powerful success in sports. Because of these, he has been voted by his peers as Australia’s greatest ever limited over players. After November 2007, he might be feeling somewhat dissatisfied with his domestic environment. However, he may enjoy travel and have a special affection for foreign places and people. At this time, transiting Mars is in trine aspect with Sun. Having this favourable aspect, he will be more creative and confident in playing next year. Transiting Saturn is passing through eleventh house and 5th house is also aspected by transiting Saturn. Hence, Relationship with friends will improve and he will perform very well in sports. All in all Rahu and Ketu which are playing an important role in his life will give him remarkable achievement.

May Lord Ganesha bless him with happiness and prosperity in his future!