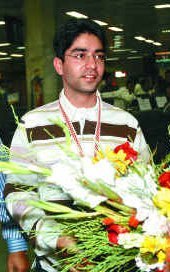 Introduction:
At the time of Olympics, India rarely gets a chance to capture and celebrate the victorious moments. But, Abhinav Bindra, by winning a gold medal, has gifted this moment of happiness to India after a very long time. Bindra is the first Indian who bagged the individual gold medal at Beijing Olympics in the air rifle event on August 11, 2008. He has archived many gold medals in his career but this is the most prestigious gold medal for him and also for INDIA. The whole world has recognized his talent and there is no doubt about his potential. Before this, India grabbed only one gold medal in hockey back in the year, 1980 in Olympics.

But now the billion dollar question is that what had happened to Bindra in the past? Why he could not achieve any medal in earlier events? The answer lies in the date of his achievement. He was born on September 28, 1982. So his birth number 28=1. Now the current year is 2008 which consists of both 2 and 8 numbers of his birth date. Hence, the year becomes very significant for him. His current personal year Number is 11=2 and personal month number for August is 1. The total of Golden Date is 11=2 and his personal month number 1 repeated twice. Date 11 was fortunate for him because it was perfectly aligned with his Personal year number 2 and also personal Month number 1. So all the positive energies got concentrated on the final event Date 11. The amazing combination of Number 1 has produced the miracle and made him Indian sportsman Number 1!

Now let’s analyze his name. His name, ABHINAV BINDRA comes to number 36 that is 9. Interestingly China’s name number is 6 and the Venue of his victory was Beijing whose total comes to Number 9. His destiny number is 3 and name number is 9, both were perfectly matched with the country and the venue names. So the country as well as the venue, both were favorable for him. The total of his name is 36 which is also a lucky number indicating authority, power and command. It also signifies that the rewards of his hard work come from his productive intellect.