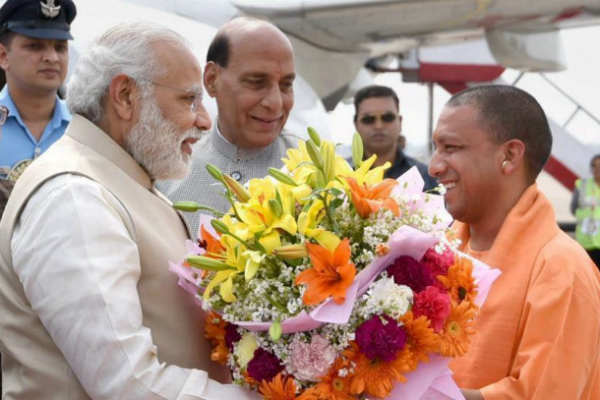 Mahant Yogi Adityanath, an Indian priest and politician, and a well-known proponent of nationalism and the Hindutva ideology, created history by becoming the Chief Minister of Uttar Pradesh after the recent polls on a BJP ticket. Yogi Adityanath has been a MP from Gorakhpur, Uttar Pradesh, for five terms in a row since 1998. Yogi Adityanath is head priest (Mahant) of the Gorakhnath Math, a Hindu temple in Gorakhpur, a position to which he was elevated after the death of his guru, Mahant Avaidyanath, in 2014. There are a lot reports doing the rounds about the inclusive and harmonious environment inside the famous Gorakhnath temple complex, and his image as a tough, no-nonsense administrator. Making Yogi Adityanath the UP CM has raised hopes amongst Hindus that the construction of the Ram Mandir in Ayodhya may be on the agenda. But majority of the masses in the biggest state of India seem hopeful that Yogi Adityanath will be able to bring an end to the law and order problems as well as initiate major reforms. However, Ganesha takes a peek into Mahant Yogi Adityanath’s Horoscope and concludes that UP’s development will be his top-most priority. Read on.

Yogi Adityanath has created history by becoming the Chief Minister of Uttar Pradesh when BJP emerged as the winning party in the UP Assembly elections. Oath taken by Mahant Yogi Adityanath at 14:20 on 19 March 2017. The Oath chart has some striking factors.

CM Yogi Adityanath Will Waste No Time In Kicking Off Reforms

Generally, fixed Ascendant and Shirsodaya sign are preferred for Oath taking ceremony. Yogi Adityanath’s oath taking chart has Cancer Ascendant, a movable sign. Also, the Lord of Ascendant Moon is debilitated in the 5th house. It indicates that the Yogi Adityanath Government in UP will be very active, industrious and unbending from the beginning. It will take some innovative steps and reforms will be implemented as soon as the government takes charge. However, it may also bring some discomfort and opposition as Moon is debilitated.

Buy The Career Prospects Report Now To Get Clarity About Career

Yogi Adityanath UP CM Will Push His Agenda Despite Roadblocks

The Lord of Moon Sign, Mars which is also a Yogakaraka is placed in the 10th house. Mars shows the strength and power of the new government. The Yogi Adityanath Government will be willing to implement its agenda with determination despite several roadblocks and obstacles in the way. The Lord of 7th house Saturn is placed in the 6th house (house of enemy, which indicates that the opposition parties will get united to oppose the Yogi Adityanath Government’s policy and therefore it will be a mammoth task for the Yogi Government to avoid controversies.

UP CM Yogi Adityanath Will Improve Law And Order In State

Mars is aspecting the Ascendant and Moon, both of which indicate that the ministry of home and public health will be the prime focus. The Yogi Adityanath Government will take some firm steps to improve law and order conditions in the State. There will be major reforms and administrative efforts to improve the image of police and other law enforcing agencies. However, the aggressive steps may also bring criticism and opposition from various sections of the society.

Yogi Adityanath To Focus On Education And Youth Development

The Ascendant Lord Moon in the 5th house indicates some strong steps and policies in education system of the state, and much more focus on youth development. With the presence of three planets in the 9th house and exchange between Mercury and Jupiter, there will be hyper activities regarding religious issues. The Yogi Adityanath Government will take firm steps to ban cow slaughter and will also force its agenda to remove the triple talak.

UP CM Yogi Adityanath Will Tackle Ram Mandir Issue With Tact
The sensitive issues like Ram Mandir will also remain in prime focus of the new Yogi Adityanath Government. However, the exchange between Jupiter and Mercury indicates that the Government may rely more on negotiations/legal path. Retrograde Jupiter indicates that the government may take some out of the box steps to build the Ram Mandir. Though it will trigger some fresh challenges.

Yogi Adityanath May Have To Fall Back On Center For Funds

Amid Negative Events, Adityanath’s Focus Will Be On Development

However, Mars is placed in the star of Ketu which is placed in the 8th house. It indicates power of new UP CM Yogi Adityanath is curtailed. There will be major controversies in the state after November 2017 and the first half of year 2018 will remain a tough period for CM Yogi Adityanath to manage the problems. Again the period between March 2019 and September 2019 will be an acid test for Yogi Adityanath. Amid some negative happenings, the new government will work with the prime focus on state building program.