Will the Lokpal movement breach the banks or turn to a trickle, Ganesha finds out 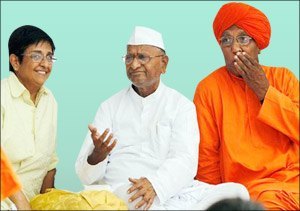 The accomplice to the crime of corruption is frequently our own indifference- as quoted by Bess Myerson. How true! We mooted a law ' the Lokpal bill' to stem the tide of corruption in our country way back in 1966; 44 years hence, it is yet to be formalised and adopted. This is the level of indifference amongst us - Indians. The Lokpal Bill provides for filing complaints of corruption against the prime minister, other ministers, and MPs with the ombudsman. The Lokpal Bill was for the first time presented during the Lok Sabha in 1968, and was passed there in 1969. However, it was pending in the Rajya Sabha while the Lok Sabha was dissolved. The bill was revived in 1971, 1977, 1985, 1989, 1996, 1998, 2001, 2005 and most recently in 2008. After 42 years, the Lokpal Bill is still pending in India. Meanwhile the activists of India Against Corruption (IAC) have prepared a draft for the bill called Jan Lokpal Bill. The Jan Lokpal Bill is a draft anti-corruption bill drawn up by prominent civil society activists seeking the appointment of a Jan Lokpal, an independent body that would investigate corruption cases, complete the investigation within a year and envisages trial in the case getting over in the next one year. In this context Anna Hazare, had started a fast until death to demand the passing of the bill. Since the Government has responded positively with some minor changes in his demands, Hazare on 9 April 2011 called off his hunger strike bringing to an end his 98-hour protest. The Lokpal Bill is likely to be passed by 15 August 2011. At this crucial juncture when the world is witnessing mass protests around the world, Ganesha tries to analyse the cause that jolted us out of stupor and foresee the course of action in the coming days. 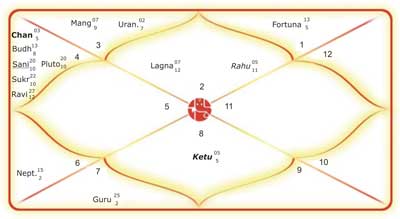 The placement of Rahu in the Ascendant of India's chart points out that the corruption is woven into the nature of our country. Rahu indicates double standards, loose moral values, selfishness and hypocrisy. India entered the sub-period of Rahu in the major period of Sun on 3rd November 2010. Rahu is the planet of scandals and frauds. Rahu sub-period has brought to the fore the 2G spectrum scam, CWG scam, Adarsh scam, housing loan scam, etc.  India is passing through the major period of Sun and, Sun is placed in the 3rd house(Upchaya sthana) with four planets. This indicates that the common people of the country would not wake up until they are completely disregarded and  humiliated and pass through extreme pain, sorrow and tragedy. The five planets in the 3rd house form an extraordinary yoga in India's chart, which infact is the driving force of the movement against corruption that the country is witnessing at the moment.  The Saturn-Jupiter opposition is also an important factor of this mass movement. Jupiter always tries to expand and mobilize and  Saturn wants to structure and confirm Jupiter's expansive ideals. So Jupiter and Saturn cycles play an important role in  societal cycles of growth. It effects areas such as economics,  politics, law, social issues, education and religion. From 6 December 2010,  Jupiter is transiting into Pisces, opposing Saturn, ruining whatever is left of dignity and idealism in the strife torn world we live in.  But the frustration created by this opposition will have positive impact on country's health when the Saturn enters Libra. Rahu sub-period will remain in force till 28th September 2011. Rahu's placement in the Ascendant of India's country chart and in the star of Sun will continue to expose the government and influential politicians. They will try subterfuge to defuse the people?s movement against corruption from gathering storm. Saturn transiting through Virgo will not allow major constitutional changes till mid November 2011, indicating that it will not be easy for Anna Hazare and his team. The whole process may have to face many a road blocks and sure-shot constitutional challenges.  However, the  Anna Hazare movement will prove to be the catalyst, which allows rage to be expressed freely and unreservedly on the Indian streets. It will definitely help shake-up the entire socio-political structure of India. The Ascendant Lord of Varsha Kundli, Venus is in the 5th house, indicating an uprising by students and youth against corruption.  The politicians will be working extra hard to tone down the ruckus by the common people of India. The efforts will be clearly seen between 28th September 2011 and 16th July 2012 during the sub-period of Jupiter.  The role of Indian Judiciary will be more prominent after 15th of November 2011, when the transiting Saturn enters Libra. As the planet of justice, Saturn will bring about significant constitutional changes related to corruption and other sensitive issues. However, it may not be enough to pacify the anger and frustration of people, and hence, we may see widespread agitations between 16th July 2012 and 28th June 2013 in the sub-period of Saturn. It could be a time when people take charge of our democracy!With Ganesha's Grace,Tanmay K.ThakarThe GaneshaSpeaks Team
Share