Dr. Raghuram Rajan – Will he match up to the massive expectations?

Gradual and graceful yet a consolidated and strong approach would be displayed by the new RBI governor Dr. Raghuram Rajan, says GaneshaCometh the hour, cometh the man! Stepping in as captain of a sinking ship is not a job many would envy. The rupee has fallen from around 50 to nearly 70 to a US dollar in the last three months. The Indian economy is falling through the bottom, inflation is shooting through the sky. Foreign investments have pretty much dried up. Dr. Raghuram Rajan, who took over as the 23rd governor of the Reserve Bank of India on September 4, has his task properly cut out. Yet, the IIM (A) gold medallist, former chief economist of the IMF and president of the American Finance Association has proved in his very first salvo to the media merely a day after he filled in the shoes of Dr. D Subharao that he means business. With this, he has raised hopes that he would do his best to resurrect the Indian economy. In his media appearance, he showed that he had done his homework well, as he laid out a detailed road-map of his three-year tenure by announcing measures which he called the “big package”. The markets too immediately responded positively, as the next day the Sensex rose and the rupee gained substantially. As soon as Rajan was announced as the new RBI governor, reams of column and editorial space in leading dailies and business journals were devoted hailing India’s messiah, who is expected to create magic. His fetching looks, apparantly being pereceived as dreamy and rebellious (to quote the columns), have also hit the headlines, and allegedly a Bollywood producer has already announced a biopic on Rajan’s life. Wow! That’s called as a red-carpet welcome!

However, it is too early to say whether he can really dispel the all-pervasive cynicism and put India back on the high-growth path – the most important goal that he would be expected to attain. Well, the time will tell! And, thus Ganesha probes the future to find out what Dr. Rajan’s tenure may bring. 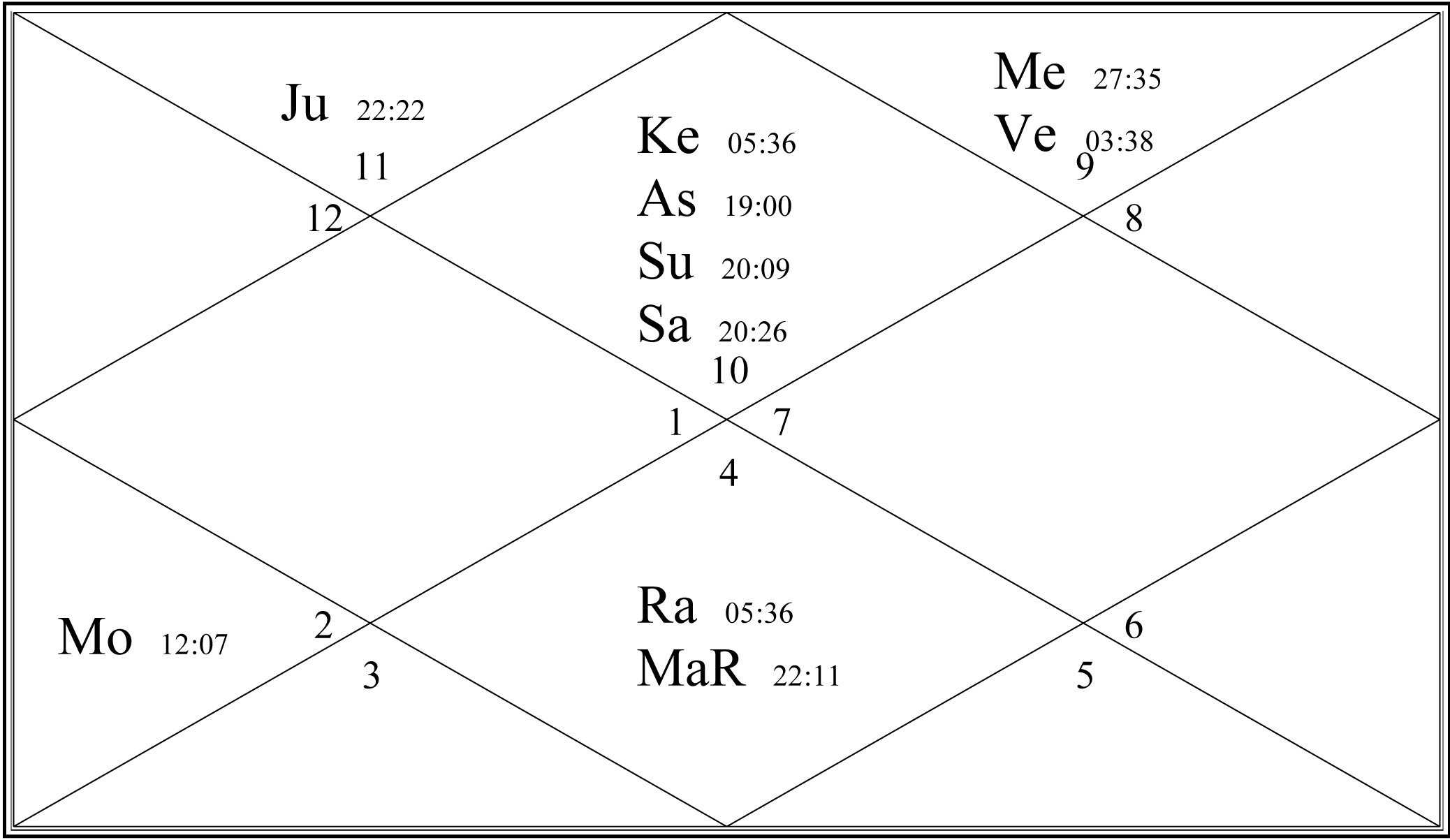 Astrological Analysis (Done on the basis of Surya Kundali):
The Birth Time of Mr. Raghuram Rajan is unavailable, so the following analysis has been done basis only his Birth Date and Birth Place, and hence the Surya Kundali.

In the Surya Kundali of Mr. Raghuram Rajan, the Lord of the Finance House and the Ascendant House is the same that is the planet of Saturn. And Saturn is Swagruhi (that is, it is in its own House). Plus, Saturn and Sun are in a combination in Rajan’s Kundali in the First House (Ascendant) itself. Generally, the Sun is considered the signifier of the government positions, government affairs, and that is why we may surmise that Rajan has received the astrological support for the position he has just bagged.

It is also noteworthy that in Rajan’s Kundali, Moon is exalted and the Venus-Mercury combination is favourable, something which helps him take logical decisions. Plus, his stars indicate that he has an active, fertile mind. His bent of mind is also likely to be speculative, which makes him good for such a position.

Speaking of the negative aspects in Dr. Rajan’s Surya Kundali, it may be noted that his Mars is not favourably placed. The House (in his Horoscope) that is believed to signify the Policy Decisions as well as the House (in his Horoscope) which signifies the result of one’s decisions is ruled by the aggressive Mars. And, as aforementioned, Mars is somewhat disturbed in Rajan’s Horoscope – Mars is retrograde as well as it is debilitated, plus it is in combination with Rahu in his Horoscope. This would have a potent effect on Dr. Rajan’s and his policies’ overall impact. Summarily, Ganesha feels that owing to these planetary positions, the policy decisions taken by Rajan may not be as impact-ful and hard-hitting as we would want them to be, and his decisions, even though strong, may not have immediate effect.

What Next – the forecast
The future largely depends on the status of the transiting planets and their interactions with the planetary combinations in force in Dr. Raghuram Rajan’s Suryu Kundali. Note that the Transiting Jupiter creates an aspect to Raman’s Natal Mercury and Venus. Also, Saturn and Rahu are in combination and are currently transiting through his House of Profession. This Saturn-Rahu combination shall be in effect till 14-06-2014, and this time thus would call for extreme and dedicated hard work on Raman’s part in his professional sphere. Now, that’s obvious, as Rajan may be expected to take that much time to create a real impact in the massive position he has joined. Yet, during this time all eyes shall be on him, and he would have to be extremely cautious, says Ganesha.

From 29-01-2014 to 25-04-2014 also Dr. Rajan will have to be very careful, as any of his decisions taken around this time shall be very very crucial, and may have far-reaching, long term effects. Post August 2014, however, the mighty Jupiter shall be in full support of Rajan’s Natal planets, something which will result in even better policy decisions on his part. However, the intelligent and genteel Dr. Rajan will have to try hard to come across as strong enough, if he has to really make an impact.

Summarily, we may not expect sudden and (even though expected) real-quick decisions from Raghuram Rajan. We will have to wait for him to adjust, and gradually he would start bringing required and desired policy changes. Ganesha emphasises that Dr. Rajan’s Natal Saturn is so strong that even though he would be gradual and measured, his overall approach would be solid. That is also the reason behind his spectacular personality.

We wish him all the best, and sincerely hope that he manages to bring India and its economy to a consolidated position.