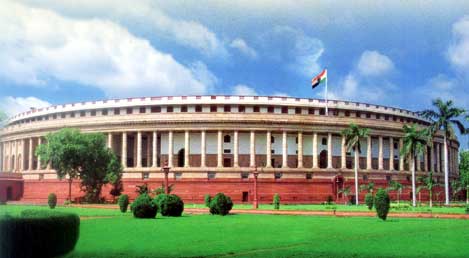 ‘Elections’ is the word which amazes every politician of the opposition party. At the same time it also gets on the nerves of the ruling party.

Political observers are busy trying to grapple with signal about whether Indian Parliamentary elections will take place this year or the following year, 2009.

Ganesha tries to look for the answer from Astrological point of view and for that the chart of India Independence of 15th August 1947 midnight needs to be reviewed.

The unique feature of this chart is placement of two major planets, Saturn (Shani) and Jupiter (Guru). Here both are placed in exchange of each other’s exalted sign. Saturn is placed in Cancer (Karka rasi) which is exalted sign for Jupiter. While, Jupiter is placed in Libra (Tula rasi), an exalted sign for Saturn. Direct or implicated connection between Saturn and Jupiter sets some sort of revolution or turn around as they say. To evaluate this we need to go back.

Saturn entered Cancer around end of May 2005, while Jupiter entered Libra around end of September 2005. The upward move of the economy along with other parameters took roots around this time. Both repeated their respective radical positions.

Now the interesting phase commences with Jupiter entering Scorpio and passing through 7th house in Natal chart. Jupiter transiting through house of relationship and Public influenced both positions of Saturn the radical and transit. This further pushed development northwards. Stock market indices showing new heights, reflecting healthy position of economy from practically all dimensions. Further up Jupiter continues to aspect Saturn transiting through demonstrative Leo. Now there is a strong urge to earn recognition as fast growing economy. Many new fields opened for entrepreneurs to trade in.

Now let us take note of earlier transits of Jupiter through Sagittarius. These transits induce new changes in political scenario. Government brought some unprecedented legislation. Important among these is RTI act. This created ripples in administration in India. This also created great hopes as Jupiter transits through optimistic Sagittarius.

Way back around 1984 Jupiter passed through Sagittarius. Rajiv Gandhi became Prime minister. There used to be great expectations from novice Rajiv Gandhi. We all know that great revolution in technology was ushered in by him. Country is enjoying fruits of actions taken during his regime. Rajiv tried to change old thinking of the ruling party. A really mammoth task undertaken by him.

In eighties Saturn passed through Leo along with Rahu. This transit took place in 4th house of India independence chart. This directly influenced house of Governance. Leo represents ruling authority. With two major malefic passing through Leo authority stooped low to hold power. Prime minister ruled the country without calling sitting of Parliament as we all know. Jupiter also passed through Leo around the same time. This brought some balance and in turn Indira Gandhi again became Prime minister.

Now currently Saturn is transiting through demonstrative Leo. Influence of Saturn over house of governance puts pressure on ruling party. However, here Jupiter is influencing Saturn. Jupiter will also have influence over house of finance and Mars placed therein. This indicates that change is likely to be healthy. Meaning people will be wise enough to choose their leader. The coming parliamentary elections will present solid agenda. The party coming to power this time is not likely to be bend much to seek support from other small parties. The verdict this time is most likely to be clearer.

In view of these positions Ganesha strongly feels that

1)Parliamentary elections are most likely to be held during transit of Jupiter through Sagittarius. Herein period around middle of August to middle of October looks significant.

2)The verdict is likely to be clearer. Meaning a single party will hold majority.

3)Even if some support is needed it will not be to the extent present government and earlier regime of Atalji needed.

India as a country will have better ideas to grow and make its presence felt at international level.