What could be the future of India if Sardar was PM of India? 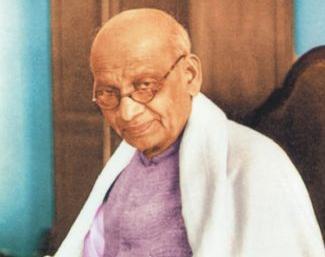 Sardar Vallabhbhai Patel was born at his maternal uncle’s house in Nadiad, Gujarat.

In his chart, Saturn is the Atmakaraka planet and thus Karakamsa becomes Virgo. Saturn is placed in its own sign Capricorn. A strong Saturn is always an asset for any politician. It bestowed him patience, seriousness, relentless and strength to stand against the odds.

Saturn is placed with exalted Mars in his chart, which is a striking feature giving him very controlled aggression, determination, enduring chemistry as well as ability to organize. He was recognized as “Bismarck of India” and all the great politicians have this strong Saturn-Mars conjunction in their charts. He was more than India’s “Bismarck” though. Few in India would be able to recall that it was Sardar Patel who with his pragmatic and visionary statesmanship welded more than 500 princely states of India into a merger with India.

The conjunction of Amk, Bk. Mk, and Gk in the 10th house from Ak is forming an excellent Gemini Rajayoga. The conjunction of AK Saturn and PK Mars is another superb Rajayoga and if we apply the Karakamsa to natal chart, this conjunction falls in the 5th house making him very efficient in handling the opponents with great courage.

Four planets in Airy sign Libra, the sign of balance seems great. He could take vital decisions with his sound judgments and foresight in any adverse condition. Mercury placed with Jupiter was the major force indicating very logical and strategic mind. Sardar Patel with his eagle-eyed strategic vision and as a strong votary of political statecraft based on `political realism’ as opposed to `political idealism’ had given many warnings in writing to Nehru on his Kashmir and China policies. But unfortunately it was all in vain.

In Nehru’s chart, Moon is placed in the Ascendant and hemmed in between malefic suggesting highly emotional, feminine and also a bit wavering mind but at the same time gave him charismatic personality. The Sun is in Scorpio suggesting a strange contradiction in his personality. The presence of Jupiter and Ketu in the 6th house of his chart made him an agnostic. Soon after the independence, the conflicting aspects in Nehru’s persona came to the fore. On one hand, he was a democrat and revolutionary; on the other hand, he was habitually carried away by his ‘Socialist’ ideals to the point of blundering with India’s destiny.

Nehru could make the greatest speeches, but was unable to take a decision at a crucial moment. Thanks to Patel’s decisiveness, troops were flown to Srinagar in right time and the airport, the only link with India, was saved. We can very clearly point out the indecisive nature of Nehru by the Moon’s position in his chart and the lack of aggression by Mars placement in Virgo.

Gandhiji has Libra Ascendant and Venus, Mercury, Mars placed in the Ascendant. All these three fall in the 4th house of Nehru’s fourth house (heart) on Venus and Mercury indicating special relationship and emotional attachments. Sardar Patel was easily the most popular leader at the time of independence and everyone knew his efficiency and his toughness for tackling difficult problems. 12 out of 19 Pradesh committees nominated him and none nominated Nehru. But Gandhi had favored Nehru. Dr Rajendra Prasad very rightly stated ‘Gandhi has once again sacrificed his trusted lieutenant for the sake of the glamorous Nehru.’

Just imagine what our fate would be, had Sardar become our Prime Minister in place of Nehru.

1) The whole Kashmir would have become a part of India and there would not have been any UN dispute and also we would not be needed to give special status to Kashmir, it would have been easily assimilated into the sovereign India.

2) Other countries today would not have been hesitant condemning the terrorism and terrorism might not have such deep roots in Indian society.

3) We could have more decisive foreign policy and would have prominent Indian voice in UN and on international level.

4) We could have stronger economy and real democracy and could avoid just a single-family dominance in Indian politics.

And more importantly we could more proudly say “WE ARE INDIAN”.

Without Patel, Gandhi’s ideas would have had less practical influence and Nehru’s idealism less scope.

We salute the great “Sardar” and we really miss him!!!