With the Jupiterian wisdom, Venkaiah shall smartly tackle the parliamentary issues, says Ganesha... 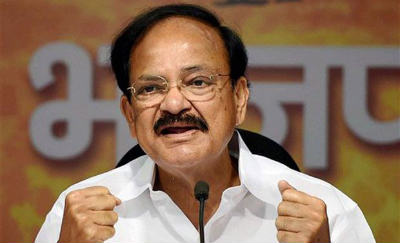 Muppavarapu Venkaiah Naidu, is one of BJP's tallest leaders and is the brightest figures from the southern state of Andhra Pradesh to represent the party at the national level. He has tremendous knowledge and experience in the field of politics and he is one of the wisest and experienced leaders of the BJP. He was the Minister of Rural Development in the NDA Govt., led by the then Prime Minister Atal Bihari Vajpayee. Currrently he is the Minister for Urban Development and Parliamentary Affairs in the Narendra Modi Government. It had been exceedingly difficult for the Lok Sabha to function properly in the Monsoon Session, due to the insensitive and hollow Disruptive tactics of the Opposition Parties. Naidu, has not at all been happy with the way things are going on in the Parliament. So what lies ahead for the veteren politcian? Ganesha takes a peek...
Venkaiah Naidu:-
Date of Birth :-   01st July , 1949
Time of Birth :-  Not Known
Place of Birth :- Chavutapalem, Andhra Pradesh, India
SOLAR CHART
[Owing to the unavailability of credible birth-time of the celebrity, the analysis and predictions have been done on the basis of the Solar Chart/ Surya Kundli with the help of his birth-date and birth-place only.]
Astrological Predictions :-
Ganesha wishes a great time ahead to Venkaiah Naidu.
With Ganesha's Grace,
Rantidev A. Upadhyay
The GaneshaSpeaks.com Team
Share