Hillary Clinton Is Likely To Have An Edge In The Second Debate, Feels Ganesha 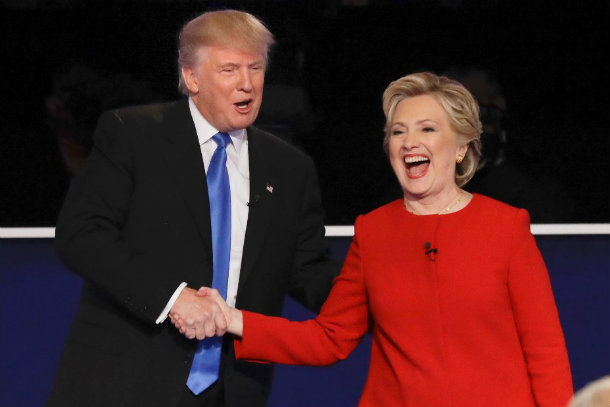 With the US presidential election drawing closer, and the second debate scheduled to be held on October 9, 2016, the race between Hillary Clinton and Donald Trump is heating up. With polls showing Hillary leading Trump by 3% points, the battle for the next US president is deliciously poised for an exciting finish. The first debate was very close and GaneshaSpeaks.com did predict it to be slightly in favor of Donald Trump. The second debate will see a better Hillary Clinton and she is likely to have an edge over the mercurial Donald Trump.

Astrological Predictions:
On October 9th, ie the day of the second debate, the transiting Moon will be aspecting natal Saturn and Mars in Hillary’s chart. This means that she will be confident and well prepared for the debate. The transiting Mercury in Virgo indicates that she will be able to successfully set traps in a methodical and calculative manner further damaging Trump’s standing.

But, the transiting North Node(Rahu) will not allow her to dominate fully and may even put her in some confusing or complex situations. The transiting Venus in Libra is a big positive for her hence she will be able to impress her committed voters significantly. But, it will be difficult for her to gain support from the important section of undecided voters. Also, the current Rahu sub-period has the potential to bring some damaging information to the surface which can be difficult for her to handle in the second debate.

Also Read: Donald Trump: Will His Political Antics Pay Back? Ganesha Explores In This US Elections Exclusive!
The transiting Moon will provide Trump some good opportunities to catch up with Clinton in the second debate. But, the transiting Mars aspecting the natal Mercury indicates that he will be unable to control his aggression required to take full advantage of the situation. He will try to maintain some semblance of composure but he may fall back into his original methods. The transiting Mercury will be moving over the natal Jupiter hence his arguments will be logical and impressive but his temperament may require great control to win the debate. The debate will be evenly poised but Hillary will have a slight edge and hence more chances to impress voters.

Astrological analysis: Between now and the second debate
According to the current planetary calculations, the transiting Mercury has entered Virgo, its sign of exaltation, there by reducing the malefic influence of North Node(Rahu)-Mercury conjunction on Hillary Clinton. This boosts her fortune since mercury determines luck in her horoscope. But, she is passing through the sub period of North Node(Rahu) which makes her position vulnerable. Adverse impact of some random events or damaging information regarding the ongoing controversies can impede her progress. Are you facing some problems in your business? Do you want to get the right solutions to experience greater progress? Then our Remedial Solutions For Business will prove to be your best friend.

On the other hand, the transiting Mercury conjunct with the natal Jupiter will help Trump to redefine his strategy, which will let him recover some of his lost ground. But, the transiting Mars is aspecting the natal Mercury which indicates that he will become more aggressive and is likely to make some strategic mistakes.