Thorns in the path of John McCain in US Presidential Elections 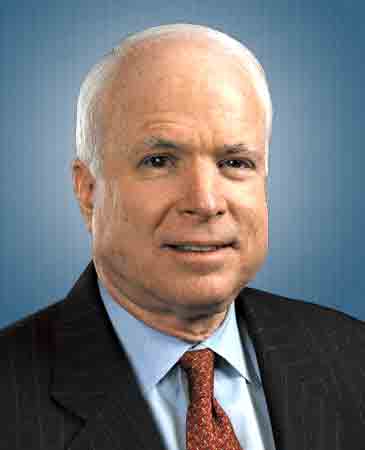 The senior United States Senator from Arizona, John Sidney McCain III is the strongest candidate for the Republican Party nomination in the 2008 presidential elections. Ganesha however foresees obstacles in his path to becoming the U.S. president.

John McCain has emerged as the strongest candidate for the republicans at the moment and is leading the polls right now. He has Mercury placed in the Virgo Ascendant, which makes him communicative die-hard politician. He had spent over 6 years in a Vietnamese prison after being shot down on a mission as a naval aviator, which is indicated by Mars-Pluto conjunction in watery sign Cancer.

He is also a strict republican. Moon in opposition with Pluto and Mars does not make a person flexible and also Moon is hemmed in between two malefic planets showing his fanatic behavior. Lord of 10th house Mercury is exalted in his natal chart but debilitated in the Navmansa chart and thus becomes weak. Debilitated Ketu is placed in the 10th house, which is undesirable indicating hurdle in his way to Presidentship.

He is currently under the influence of Saturn-Jupiter-Ketu period. Ketu is debilitated in natal chart but exalted in Navmansa chart and also placed in the 10th house of D-10 chart. He might experience tough challenges in his campaign. Transiting Jupiter is moving close to the 4th house cusp and aspecting the house of authority. Planets on 5th of February align well indicating success. But he does not have a Moon-Jupiter aspect or a Mercury-Saturn-Pluto combination, which generally appears in successful Presidential candidates. And also the transiting Saturn in Leo moving on the 12th house cusp in September over the natal Sun may not help his cause. He will have to take extra care of his health. Moving closer to the election, McCain could be facing health issues at that time So, he might become a presidential candidate for Republicans but may not be able to become US President. White house seems a far fetched idea for John McCain.

From an astrological point of view, February 5 becomes very important during primaries as the transiting Saturn opposing the US midheaven. New Moon occurring just two days later indicates ending for many candidates and new beginning for others. Mercury is moving retrograde on 5th February so it is possible that Parties may not have a clear winner on Super Tuesday but more primaries and information will be needed to get a clear picture. Information about candidates may be conflicting and misleading and unexpected developments may change voters’ opinions at the last moment. Mercury turns direct on February 18, which will be in exact square with the U.S. Ascendant. So the next important date for US elections would be February 18.