The corruption demon to tighten its hold over India in 2011

Year 2010 has been a year of scandals, controversies and mismanagement for India. A country with a population of over 1.18 billion, India boasts of
being the biggest democracy in the world. But the corruption demon is engulfing the country at such a fast rate that there seems to be no return now. Or is there a way out? The million dollar question is, ‘will corruption continue to engulf the country in 2011?’ Unfortunately, the answer is ‘yes’, says Ganesha with the help of Vedic astrology. 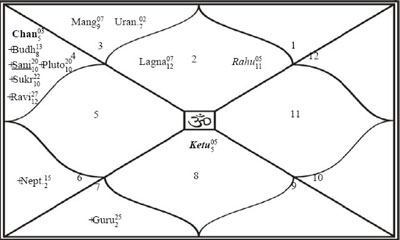 India is currently passing through the Sun Mahadasha and Rahu Bhukti. Rahu is placed in the Ascendant of India’s Independence chart. The placement of Rahu as the Ascendant in India’s chart points out the corrupt nature of our country. Rahu indicates double standards, loose moral values, selfishness, and hypocrisy. In fact, corruption started spreading its wings long back in our country, and spreading like wild fire, now it has become evidently uncontrollable.

The transiting Rahu is moving into the 8th House. The 8th House is the House of scandals. So, according to Ganesha, corruption will continue to fan out, whatsoever. In fact, there are many more controversies and scandals that are waiting to hit the political, social and economical grounds of India. Unfortunately, the welfare of the common man will hardly be taken into consideration, and interest in perpetuating the rule of a particular dynasty will increase. There will be economic growth, but the rift between the rich and poor will widen, generating unrest in the middle class. Saturn and Jupiter will
be opposing each other during 2011. This will add to India’s troubles, as it will decimate India’s dignity and idealism further. There are chances of formation of many more new political alliances, only to satisfy the hunger for power.

Adding troubles to the already troubled nation will be the four solar and two total lunar eclipses during year 2011. Political uncertainties and dramas will continue to disturb the country. Along with abrupt changes in leaderships, an unexpected demise of a well-known political figure (holding an important position) is also foreseen. The transit of Rahu in the 7th House during the later half of year will have a strong impact on India’s relationship with the neighbouring countries. The turn of events may prove to be indications of a turbulent Sino-Indian relationship in the future.

With the kind of political scenario we are likely to experience in 2011, India’s dream of becoming a world power is likely to fizzle out.