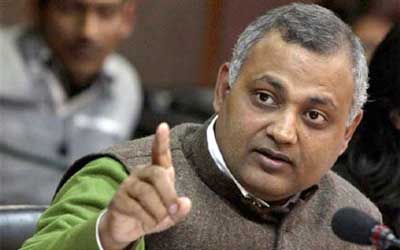 Somnath Bharti is an Indian lawyer, practicing at the Supreme Court and Delhi High Court, who took to politics by joining the Aam Aadmi Party. He was elected as the AAP candidate for the Malviya Nagar constituency in the Delhi assembly elections of 2013 and was made Minister of Law, Tourism, Administrative Reforms, Art and Culture in the AAP’s Delhi governement. Bharti’s wife has recently filed a domestic violence case against him as well as charged him for trying to force a miscarriage on her when she was pregnant. This has given his political opponents a lot of ammunition to fire at him.

While the legal proceedings are still going on, Ganesha analyses what the future holds for him.

Is he in for more trouble or do the planets indicate some respite?

Ganesha wishes a great time ahead to Somnath Bharti.