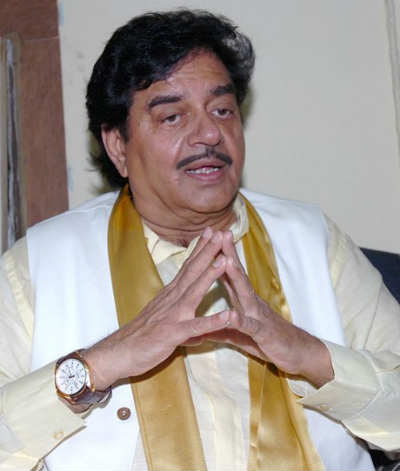 Shatrughan may  be seen in a more active role in his career, acting or politics after August 2016....
Shatrugn Sinha, the one who made the word, 'Khaamosh', expressive as never before,is a very popular actor turned politician! Though he made his onscreen debut with Prem Pujari, Sajan became his first onscreen released movie! He went on to gain name, fame and recognition with his more well known movies like Kaalicharan, Naseeb, Kranti, Kaala Patthar, Vishwanath, Blackmail and many more. This very versatile actor has played the hero and villian with equal panache and very few people know that he has had a small stint as a playback singer as well...! Married to former Miss India, Poonam Sinha and a proud father of Sonakshi, Luv and Kush, this gentleman dons many hats and plays many roles with equal justice and grace. On this occasion of his birtday, Ganesha takes a peek into Shotgun Sinha's year ahead... Read on...
Shatrughan Sinha
Date of birth:  09th December, 1945
Birth Time :-     Not Known
Place of Birth :- Patna, Bihar, India
SURYA KUNDLI

Important Astrological Observations :-
A bigger role in BJP?
Ruffled Feathers...
The Filmy Shotgun...
The Year Ahead...
Ganesha wishes good luck and bright future ahead to Shatrughan Sinha!
PN: Due to the unavailability of credible birth-time of the celebrity, the above analysis and predictions have been done basis the Solar Horoscope with the help of his birth-date and birth-place only.
With Ganesha's Grace,
Rantidev A. Upadhyay
The GaneshaSpeaks.com
Share