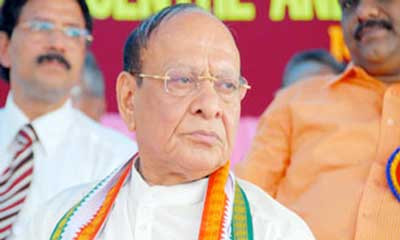 Former Union textile minister and Gujarat Chief Minister Shankarsinh Vaghela is currently embroiled in a land scam case in Mumbai after the CBI filed an FIR last week against him and 5 other National Textile Corporation (NTC) officials for selling over 27,000 square metre of prime NTC property in Mumbai to a private company at “throwaway prices”, causing a loss of over Rs. 700 crore to the exchequer. Vaghela is a Leader of Opposition in Gujarat Legislative Assembly. He started his political career with Jana Sangh, which later evolved into Janata Party. However, after Janata Party split into various factions, Vaghela became a senior leader of BJP. In 1996, he broke away from the BJP and formed the Rashtriya Janata Party. He served as the Chief Minister of Gujarat during 1996-1997. Later, his party merged with Congress. Ganesha, with the help of Vedic astrology, predicts whether Vaghela can come out unscathed from the charges levelled against him or not and what future has in store for him. Read on to know more….

Please not that the Senior Leader’s details are based on the Solar Horoscope (Surya Kundli) with the help of Birth date and place, as the Birth time is not available.

But Ganesha hopes that this controversy will soon be over and that the clouds of uncertainty get cleared from Shankersinh’s life. Ganesha wishes him good luck, great health and bright times ahead for him.