Post February 2016 we will get to see some of Rajnath's best exploits as the Home Minister! 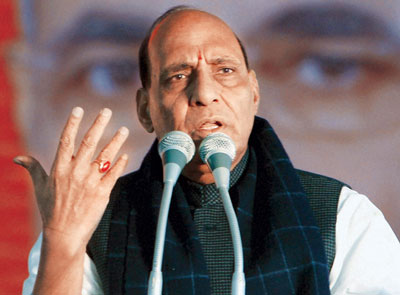 This BJP stalwart is one of Narendra Modi's key ministers and strategists, and is one of the most influential political leaders in India. There have been various issues that have cropped in the Indian political setup and there have been a lot of things that have found their way into the general Political Discourse. Security –  internal and external, defence policies, border security and related issues, and various other aspects need a lot of attention and Rajnath Singh has many tasks to achieve. How will the political ride ahead be for the seasoned politician? Find out...
Rajnath Singh – Union Home Minister, NDA Govt.
Date of Birth:  10th July, 1951
Birth Time: Not Known
Place of Birth: Bhabhar (Varanasi), Uttar Pradesh, India
SOLAR CHART

[Owing to the unavailability of credible birth-time of Rajnath, the analysis and predictions have been done on the basis of the Solar Chart/ Surya Kundli with the help of his birth-date and birth-place only.]
1) Will he be able to take strong steps to tackle the internal security issues?
Important Astrological Predictions:
Astrological Predictions :-
2) What sort of an approach will he adopt to deal with the border issues and ceasefire violations by India's neighbours?
3) Will he be go on to become one of the best-performing ministers of the NDA Govt. in the upcoming year?
Ganesha wishes good luck to Rajnath Singh .
With Ganesha's Grace,
Rantidev A. Upadhyay and Aaditya Sain
The GaneshaSpeaks.com Team
Share