With well-disposed planets, Mamata makes for a naturally gifted power-wielder! 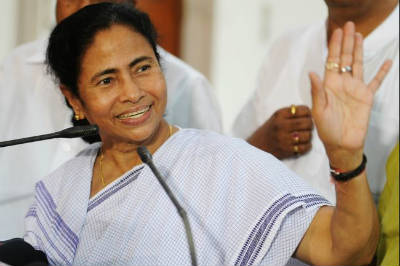 Jupiter's auspicious support till August 2016 shall help Mamata to maneuver her ship well...
Mamata Banerjee is one politician, who has exemplified power and the strength of a woman from a long time and she has been one of the most prominent woman faces of Indian Politics and Governance. Born as Momota Bandopadhyay, Mamata, who is commonly referred to as Didi, had created history in the 2011 assembly elections of West Bengal, when she pulled of a landslide victory for the TMC-INC alliance, by trouncing the 34-year old Communist Party of India (Marxist) led Left Front government, the longest-serving democratically-elected communist government! With a stern and bold approach to governance, Mamata Di has always managed to somehow be in the limelight, whether it was for her stint as the Railways Minister twice or whether it was for her inclusion in the list of the '100 Most Influential People in the World'. This gritty woman has been marching forward with various policies and governmental functions and she is now nearing another big electoral battle, which shall take place in the state of West Bengal in 2016. What makes Mamata such a strong and dynamic leader? How shall the year ahead unfold for the popular leader of the eastern state? Let us find out something more about Mamata from the perspective of the Stars!
Mamata Banerjee
Date of Birth: January 05, 1955
Time of Birth: Not Available
Place of Birth: Kolkata (Calcutta), West Bengal
SOLAR CHART

The Astrological Picture:
The Trio of Sun-Mercury-Rahu:
Love for Freedom...
Sun-Rahu Conjunction: Tendency to Become Over-ambitious!
The power of Saturn!
Mars as Atmakaraka:
The Special Role of the Benefics:
The Current Astrological Picture:
With Ganesha's Grace,
Tanmay K. Thakar
The GaneshaSpeaks.com
Share