Down, but not out says Ganesha for Lalu Prasad Yadav 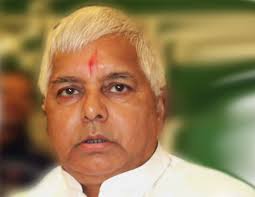 Lalu Prasad Yadav, tainted but charismatic national leader from Bihar, famous for his uncanny sense of humour and more significantly for his stint as the Union Railway Minister in UPA 1, during which he was credited with turning around the financial fortunes of the Indian Railways, and transforming it into a profitable enterprise. Currently, Lalu is a member of Parliament from the Saran constituency in Bihar. Lalu Yadav became a member of Parliament for the first time when aged 29, making him one of the youngest individuals to become a Lok Sabha MP. He reached the peak of his political career, when he became the Chief Minister of Bihar in 1990.

However, Lalu had to resign as the Chief Minster of Bihar in 1997 after serious allegations of corruption surfaced against him, specifically when the fodder scam was unearthed in Bihar. He was accused of embezzling about Rs. 9.50 billion from the animal husbandry department. His involvement in the fodder scam has haunted him ever since, and a tainted image of being a corrupt politician who used caste-based politics for attaining power lead to a considerable decline in his political fortunes. On September 30th 2013, a special CBI court convicted Lalu Yadav in the fodder scam and he has been imprisoned. The quantum of the punishment will be announced by the Court on October 3rd 2013. Keeping in mind these latest developments, Ganesha analyses the birth chart of Lalu Prasad Yadav to find out what the future has in store for him.

Lalu Yadav, the president of Rashtriya Janta Dal (RJD) and Member of Parliament, was found guilty in a corruption case on Monday. As per his unconfirmed Birth chart, Cancer Sign is rising in the Ascendant. The strong Ascendant Lord Moon is placed with the 7th House Lord Saturn in the Ascendant. So, he has been immensely popular with the masses in Bihar. Rahu is placed in the 10th House and Yogakaraka Mars in the 2nd House are other strong factors in his chart. Due to some wonderful Rajayogas in his chart, he has been an amazing leader despite his tainted political career. He is currently under the influence of Mars Mahadasha and Mercury Bhukti. Mercury is the Lord of 12th House (House of loss,separation and forced confinement) and placed in the 12th House in the star of Rahu. It is a clear indication of the verdict against him. Also, the transiting Saturn and Rahu are passing through the 4th House. Hence, he is getting discredited and imprisoned for his role in the fodder scam. However, he is running a strong Mars Mahadasha, hence RJD and Lalu will not let the opposition parties in Bihar have a cakewalk in the elections. Today, the political entertainer has been shamed, but he is not out of contention yet. The rest of the political parties will have to tread carefully, as Lalu and RJD will continue to play a vital role in Bihar politics.

Disclaimer :
Please note that these predictions are meant only for academic and research purposes, and not intended for any other use. The organisation shall not be held responsible/ liable for consequences arising out of interpretation and usage of the same by any individual/ entity in any manner. Also, these predictions have been given by the calculations, purely on the basis of AVAILABLE data.