Jitan Ram Manjhi may enjoy ‘polarization’ of votes in his favour! 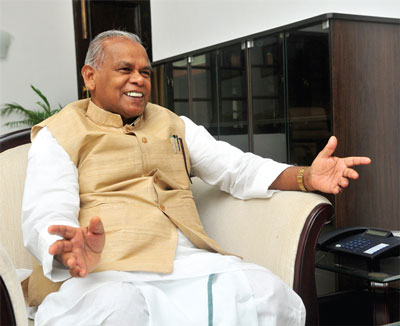 Rahu may not let his ambitions and desires be fulfilled; a tough battle foreseen!
Jitan Ram Manjhi has experienced one of the most eventful phases of his life in around the past 18 months and it has surely been a roller-coaster ride! Even in present electoral setup, he is being seen as an influential leader, who may play a significant role, especially when it comes to wooing the Maha-Dalit vote-base. From being announced as the CM of Bihar in the wake of the problems that Nitish Kumar was facing, then later being expelled unceremoniously from the party owing to some differences, thereafter emerging as a very prominent Dalit face and then going on to form his own party – the Hindustan Awam Morcha, Manjhi has been there and done that! Currently, contesting the elections as a seat-sharing partner of the NDA alliance, he seems set to enjoy a large chunk of Dalit votes and the support of his loyal voter-base. All said and done, what do his stars indicate? Will he have a good run in this election season in Bihar? Find out in the article…

The Astrological Picture:
Jitan Ram Manjhi has a strong Mercury placed with Sun in the Sign of Virgo. Also, Sun-Mercury are in trine with an exalted Moon. Adding to this, Venus is placed in its own sign in a trine position with Saturn. All these factors are indicating a bright political career.

Support of Loyal Voter Base…
Currently, the transiting Jupiter is moving over the Natal Jupiter. It indicates a “sharp polarization” of votes in favour of Manjhi. A large section of voters and his traditional supporters will be voting for him. The party will gain good support.

Not entirely a rosy picture?

But, the transiting Rahu is moving over the Natal Sun and Mercury hence his ambition and expectations may remain unfulfilled. He will not be able to win the number of seats expected from his party. He himself may be facing a tough battle in his own constituency. So, his path will be difficult and not completely smooth.

Winning the seats…
However, the transiting Jupiter may help him win the election and may also help his Party to win some seats in Bihar elections.