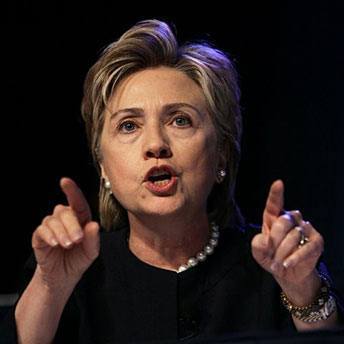 Introduction: US President-elect Barack Obama recently announced that Hillary Clinton will take the role of Secretary of State under his administration. Earlier this year in June 2008, she narrowly lost to Senator Barack Obama, who became the party’s presumptive nominee. In the backdrop of this bitter political rivalry, Ganesha unfolds the future of this diplomatic partnership.

Hillary Clinton has Libra Ascendant and strong Venus placed in the Ascendant which gives her charismatic personality. Yogakaraka Saturn placed exactly over the mid-heaven looks wonderful and makes her chart significantly strong. She is disciplined and prefers to express her strategies and policies carefully . Adding to this, Moon- the 10th house Lord is in exchange with strong Saturn forming excellent Rajayoga and gives her endless perseverance. But, it also indicates emotional volatility and she gets easily irritated. Mars is debilitated but exalted in Navmansa and is placed with Saturn in the 10th house giving her drive and ambition, but also signifying repressed anger.

She is currently running Venus-Saturn period and both the planets are remarkably powerful and well placed in her chart. But, the weakness of Saturn in the D-10 chart created hurdles in her race for White House. The transiting Rahu-Ketu have played their role during the preliminaries and restricted her progress. She will remain under the influence of Saturn Bhukti till 20th February 2011. The transiting Jupiter aspecting her 10th house may provide her with the strength to fight against the odds but the double transit effect on the 8th house may test her courage particularly between April and July 2009.

Some stressful events and pressure to take on challenges may strain her nerves in that phase. The challenging conditions created by transiting Mars in Cancer in the last quarter of year 2009 may force her to take some unprecedented and innovative steps which might be seen as a drastic change in US Foreign policies in the first half of 2010. She will be under the influence of Venus-Mercury period from 20th February 2011. Mercury, the Lord of the 9th house is placed with Ascendant Lord in the Ascendant forming Rajayoga. Adding to this, Mercury placed in it’s own sign in Navmansa becomes very powerful. Mercury is retrograde in her chart. In the first half of 2011, she will be empowered in many ways and she would stand as impressive and powerful as an American President. Her Mars-Pluto conjunction falls over the Sun of Obama’s chart. So there may be frequent ego clashes and heated interactions. Her Saturn falls over the Sun of Obama’s chart indicating a disruptive relationship.