As a rich centre of power, culture and diversity is ideally the way people should have known the Middle Eastern country Syria. Once a major centre of Islamic Empire, the modern day Syrian Arab Republic, however, is known to most people for its tempestuous political and military history. The Middle-Eastern Syrian state, as a paramilitary republic, gained independence from France in April 1946. The post-independence period, unfortunately, was never peaceful, what with numerous military coups keeping the country destabilised from 1949 to 1971.

Between 1958-1961, Syria entered a brief union with Egypt, which was terminated by yet another military coup. In 1967, the ongoing civil war in its neighbouring Lebanon allowed Syria to extend its political and military influence in the region. However, owing to intense international pressure, it pulled its forces out of Lebanon in 2005. Meanwhile, Syria has been under emergency law from the year 1963 itself. Most constitutional protections for citizens were suspended, and Syrian system of government is considered to be non-democratic. Bashar al-Assad has been Syria’s president since 2000, and was preceded by his father Hafez al-Assad. From the year 1971 onwards, Baath National Progressive Front’s Hafez al-Assad held the prime minister’s office for almost three decades.

The people of Syria have time and again retorted to the non democratic practices of government, and the voice has been suppressed rather harshly. The Syrian government, however, as of 2011 has been facing unprecedented violence and mass killings, with opinion sharply divided on whether these are protests against the dictatorial leadership of President Assad or the beginnings of a civil war. It is because of the internal strife that Syria has been suspended from the Arab League. Many are already of the view that Syria is slowly and definitely inching towards a civil war. The governments of France, Spain, Bulgaria and Libya also have recognised the major opposition party of Syria, the Syrian National Council as the sole legitimate authority of the state.

Ganesha, with the help of Vedic astrology, foresees that 2012 will be an extremely tough year for President Bashar al-Assad, and in all likelihood the escalating discontent among the populace will force a change of regime. 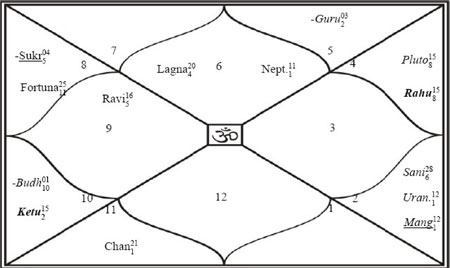 Astrological Analysis
In Syria’s country chart, Virgo is the rising sign and the Lord of Ascendant Mercury is retrograde and afflicted by Ketu in the 5th House. Syria has been under the influence of Venus-Jupiter-Jupiter since 14th September, 2011. This aspect will continue till 22nd January, 2012. Saturn and Mars both are retrograde and aspecting the Dashanath Venus. Jupiter is the Lord of 7th House (House of war) in this chart. All this is enough to explain the violence and domestic turmoil witnessed in this country during the recent times.

Syria will be under the influence of Venus-Jupiter-Saturn from 22nd January, 2012 to 24th June, 2012. Saturn is retrograde and in conjunction with retrograde Mars. In Syria’s annual horoscope, the Lord of the 8th House Mercury is placed in the 10th House with Rahu, and retrograde Mars is aspecting them from the 7th House. Muntha is placed in the 4th House with Ketu, and the Lord of 10th House Mars is retrograde in the annual horoscope. The lunar eclipse slated for 10th December, 2011 will hit the 4th House/10th House axis of Syria’s country chart.Predictions

President Bashar al-Assad will try to coordinate with the Arab League to handle the crisis. But the period between 24th January and 14th April, 2012 looks especially troubled for Syria. There will be huge confusion and large scale man made devastation may take place. Tensions may accelerate between the majority class of Sunni Muslims, and the minorities, which may result in sectarian violence. Military intervention by Western powers may further aggravate the situation. President Bashar al-Assad’s grip on power shall loosen, and circumstances may force him to take some vital decisions. The period between 15th May, 2012, and 8th December, 2012 will be decisive for him, and there are possibilities of dramatic changes in regime in Syria during the year 2012.