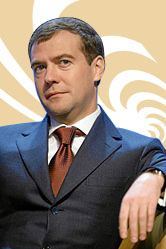 Dmitri Medvedev, the First Deputy Prime Minister of Russia, was elected as the President of Russia on March 2, 2008. His candidacy was supported by his predecessor Vladimir Putin and pro-presidential parties. Though Medvedev is associated with politics since long, he has not held elective office before 2008. Ganesha examines some similarities as well as differences in the characters of Putin and his successor Medvedev. Character Analysis Dmitri Medvedev, the nominated successor of Vladimir Putin, has Sun in fiery Leo with rebellious, innovative Uranus- Pluto conjunction and also Mercury. He is known as a moderate, liberal and practical leader but his chart shows that he is emotional, a worrier, slightly wavering, restless, and not committed over the longer term to set objective which might be in contrast to Putin's character. He has Sun, Uranus and Pluto in opposition with Saturn, which will give him a tendency to dejection and he might not live up to what is expected of him. He has Sun Square Rahu that can lift him up unexpectedly but it can also cause sudden reversals. Sun is Atmakarka and placed in the Sagittarius Navmansa. Jupiter in Gemini and Venus in Libra with Mars give a love of philosophy, arts and also the law that was his profession until he moved into politics. He has Vargottama Mercury, which makes him intellectual and curious with a wide range of interests, but Mercury square Rahu makes him a dabbler rather than an expert. His communications skills will be beyond any doubts. Mars- Neptune conjunction with Venus revel his charisma that might attract the public quite opposite to detached, serious Putin. Future Predictions Most politicians with Sun afflicted by Saturn want to do everything on their own which is not good for democracy by any means. Transiting Saturn moving in Leo over the natal Sun opposing Saturn and square to Rahu indicate that Medvedev's tenure will not be smooth and his relationship with Putin will be under tremendous pressure in November 2008 and again arguments may flare up between June and October 2009. His restless temperament may lead him to constant change, which doesn't look much encouraging for his political career. Ganesha's Grace, Tanmay K.Thakar The GaneshaSpeaks Team