A prominent politician and General Secretary of the Indian National Congress, Digvijaya Singh has been an integral part of the contemporary Indian national politics. In his political career of more than three decades, Mr. Singh has held some important offices, one of them being the Chief Minister of Madhya Pradesh. For the past few years, he has been rendering his services as one of the able administrators of his party.Despite his notable achievements as a politician, Mr. Digvijaya Singh often draws more attention for his remarks and comments than for his contribution in the current political scenario. Mr. Singh is once again in the limelight for his controversial comment about fellow politician Meenakshi Natarajan.

Do planetary influences make him say wrong things at a wrong time? Will he continue to be as influential as he used to be? Will his presence at the top will make a difference to his party in the upcoming elections? Ganesha, with the help of Vedic Astrology, tries to find answers to these questions and takes a sneak peek into the future of Mr. Digvijaya Singh and his political career. 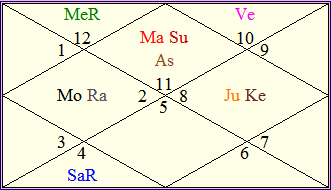 While we all shall have to wait to see whether UPA – 3 will be a reality, Mr. Singh will remain a strong pillar to his party for sure, says Ganesha. He is going to enjoy blessings and patronage from the ‘High Command’ of Congress party for his role and initiatives. He needs to cash in the situation, which may favour him in the coming days. One may hate him or love him, no one can ignore him or his presence in the mainstream Indian politics. He is going to play a very important role in the coming 2014 General Elections.

We wish Mr. Digvijaya Singh all the best.