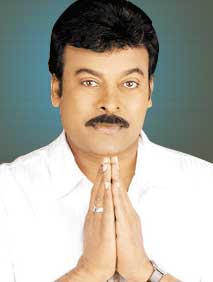 Telugu super-star and an actor, Chiranjeevi, has plunged into politics with the inauguration of his party office on August 12, 2008. Not all actors are successful in politics. He was a successful actor in Telugu Film Industry and was the cynosure of everyone's eyes. But, will Chiranjeevi's luck shine in politics too? Will success follow him in political field? Ganesha tries to answer all these questions with the help of Vedic Astrology. Chiranjeevi Date of birth:- August 22, 1955 Time:- Unknown Place:- Narsapur, Andhra Pradesh, India Chiranjeevi's Surya Kundli

Natal Planetary Strengths Ganesha observes that Chiranjeevi has Sun in it's own sign Leo which makes him a very good performer. Venus and Mars are also closely associated with Sun which gives him a great fan following. Venus in Leo makes him 'smart actor' and Mars with Sun and Venus makes him a 'Macho man'. No wonder, if Amitabh Bachchan States him 'the King of Indian Cinema'. Leo sign is heavily projected in his birth chart with Stellium of four planets and Jupiter as well Saturn are exalted so Ganesha feels that he will surely do well in the field of politics but the transit of Ketu over Natal Jupiter and transit of Saturn over Stellium in Leo may slow down his career progress. Looking at it positively, he may progress slowly but steadily. Horoscope of the Party office Inauguration time Date:- August 11, 2008 Time:- 00 hours 20 min. Place:- Hyderabad, Andhra Pradesh, India

Analysis of the Party office Inauguration time Various sources have mentioned two different times of Chiranjeevi's party office inauguration. Some say that it was 00 hours 20 min. while some state that it was 00 hours 50 min. As per Ganesha's view, the time of inauguration would have been 00 hours 20 min. because Taurus Ascendant and Aquarius Navmansha was rising during that time. If, it would have been 00 hours 50 min., then the Taurus Ascendant and Aries Navmansha would have risen. Chiranjeevi's Astrologers must have taken a fixed sign and fixed Navmansha for the inauguration, feels Ganesha. Ganesha observes that in the inauguration time horoscope, the Ascendant Lord is placed with Karma Bhuvan Lord and Bhagya Lord in the 4th house. Saturn, the Lord of Karma Bhuvan, aspects Karma Bhuvan. This indicates slow but steady progress of his party. The Lord of the seventh house,Mars, is in the fifth house in Virgo sign which is good but Moon's debilitation in the 7th house indicates that he will have to be extra careful of his public image and it may be slightly difficult for him to maintain stability with his associates or associate parties. Rahu in the 9th house of luck dampens the luck factor but the Lord of the 9th house is favourably aspecting the 10th house so he will be able to overcome hurdles. Heavily projected Saturn in his Natal and party office opening chart indicates that he will do a lot of social work. Chiranjeevi may also try to do something in the field of education with the help of his political party. His aim may not be just to progress politically but also socially. This is obviously a slow and time consuming process as indicated in his horoscope. Progress of Chiranjeevi's party The year 2008 is average for his party. During 2009 he will have to practice caution while taking decisions regarding his political activities while transiting Jupiter and Rahu will be conjunct. However, from the second half of 2009, Chiranjeevi's political career seems very bright. In 2010, when Jupiter will be in Aquarius and Saturn will be transiting through Virgo, he will be able to establish himself as a successful politician. Good luck and may Lord Ganesha bless Chiranjeevi with a long lasting success. Ganesha's Grace, The GaneshaSpeaks Team