The Bihar Battle will prove to be a Great Political Spectacle; Planets seem to be favour NDA! 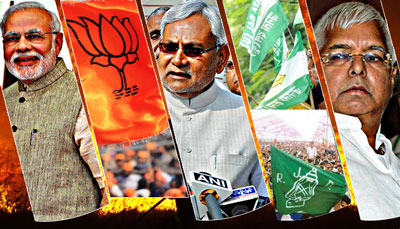 Stars seem favourable for the BJP and the NDA, but the parties aligned in the Grand Alliance shall give a tough Fight!
Bihar, from long, has been a state of immense importance and significance, especially when it comes to politics! With a large electorate, extremely intricate and a very different brand of politics, numerous fiercely competitive political parties and with various influential leaders forming the key components of the politics of this north-eastern region, the elections in this state always make for a keenly observed and intensely discussed political phenomenon in India! How shall this elections-season turn out to be this year? Will we witness something historic? What shall be the fortunes of the contesting political parties? Will Modi’s charisma and his Party with ‘development’ as its Mantra reign supreme or will Nitish Kumar and the Grand Alliance have the edge? Check out how the events may shape up in the state that currently looks like a war-zone, electrified with the buzz

The first phase of Bihar elections will start with Moon in the Hasta Nakshatra, in conjunction with Sun, Mercury and Rahu – all in the sign of Virgo. It indicates a highly unpredictable first round. Both, the NDA and the grand alliance may be in a neck-to-neck position. Tough competition is foreseen.

Moon will be passing through the Vishakha Nakshatra during the second phase of voting. The Moon-Saturn conjunction may not augur well for NDA. However, it will remain equally difficult for grand alliance CM candidate Nitish Kumar and JD(U). It indicates that the grand alliance will be marginally ahead in second phase.

Moon in the Arudra Nakshatra will once again remain beneficial for the BJP and NDA. It will be a difficult transit for the grand alliance and particularly for JD(U). So, NDA will get a major boost in this phase.

During the 5th phase, the transiting Moon in the Magha Nakshatra in the Sign of Leo along with Jupiter will prove to be very difficult for the grand alliance. It will act significantly in favour of the NDA. So, the NDA is likely to win with a big margin.

On the counting date, the transiting Moon will be passing through the Hasta Nakshatra in conjunction with Venus, Mars and Rahu. The transiting Sun will be in Vishakha Nakshatra. All these planetary influences are favourable for BJP and NDA. In this context, NDA is likely to get a comfortable majority in the Bihar elections. BJP is likely to emerge as the single largest party. LJP, Rashtriya Lok Samata Party (RLSP) will also win good number of seats. Performance of Hindustani Awaam Morcha (Secular) will remain mediocre. JD(U) will emerge as most favored party in the grand alliance. However, it may not be able to win the expected number of seats. The Rashtriya Janata Dal (RJD)’s performance will remain mediocre. Congress will not be able to make any significant impact in this elections.