It was a pleasure to learn about initiation of dialogue between North Korean and South Korean Prime Ministers, again after 1992.

Ganesha finds this to be quite interesting, astrologically so with the magnifying glass of Astrological tools, Ganesha would like to explain the matter.

North Korea’s Establishment Horoscope, say National horoscope is of Aries Ascendant, as per Vedic Astrology Method.
As per this method, Sun is posited in the South Direction i.e. Nadir of the chart. Seventh house of Partnership’s Lord Venus is placed in strong conjunction with Rahu one degree apart. This points towards division of Korea in two parts North and South as Rahu is liable for estrangements and seventh house Lord Venus’ placement with Rahu also indicates that whenever North Korea has to tie-up with other nation, they will have problem in collaboration. In other words, astrologically it is `not so easy to tie the knot with’ type of a country.

Unfortunately, South Korea’s National chart is not available but while studying North Korea’s secondary progressed chart for the year 2007, Ganesha notes the following. 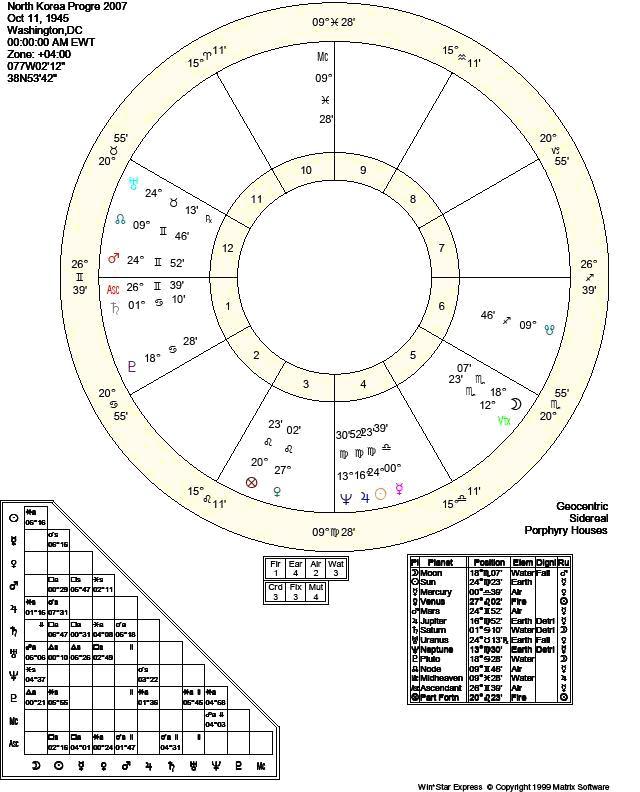 Summarily, Ganesha feels that something important and major going to happen with initiation of dialogues between North Korea and South Korea after fifteen long years. Astrologically speaking, whatever it may be, will be for good.

May Lord Ganesha bless both the countries with desired progress.