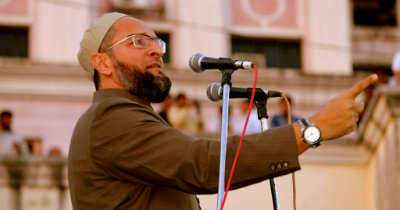 … And, due to the Mars-Mercury configuration, his brand of politics may mostly revolve around sensationalism and rebellious rhetoric.
Born to Sultan Salahuddin Owaisi and Najamunnisa, Asaduddin Owaisi is the eldest amongst the three brothers. Politics seems to be present in the genes of the Owaisi household, as it has given 3 of the most prominent politicians – Asaduddin himself, Asaduddin’s father Salahuddin (one of the former Presidents of the AIMIM) and brother Akbaruddin, who have gained considerable fame in the southern state of Telangana (formerly Andhra Pradesh). Currently, the MP from the Hyderabad constituency in the Lok Sabha, Asaduddin somehow manages to be in the news with his strong statements which are mostly sensational or controversial in nature. His statement in a public rally in Maharashtra, wherein he spoke about his freedom of speech/expression and the slogan – ‘Bharat Mata Ki Jai” have not gone down too well and have raked up a fresh controversy. Well, what do the planets have to say about this influential politician? Will he be able to expand the base of his party in other states too? How will things pan out for him politically? Let’s get to know from Ganesha.

[Owing to the unavailability of credible birth-time of the Owaisi, the analysis and predictions have been done on the basis of the Solar Chart/ Surya Kundli with the help of his birth-date and birth-place only.]

Mars providing the firepower to expand party base:

Gathering Support from various sections of the society…