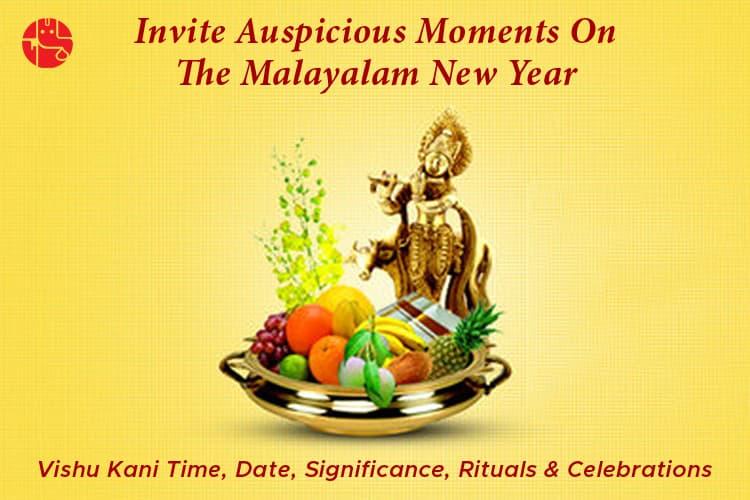 Vishu, a Sanskrit word which is also called Vishuva in Malayalam, signifies equality and, in the context of this festival, it connotes the completion of the Spring Equinox. It is a belief that a person’s future is a function of what one experiences and if he/she experiences auspicious and joyful things as the first thing on Vishu, the year may turn into a fruitful one for the person.

Mesha Sankranti is celebrated as Vishu Kani in the Southern state of Kerala. People in the Malabar area consider Vishu Kani as the astrological New Year. In 2020, Sankranthi on Vishu Kani or Malayalam New Year will occur on Tuesday, April 14, at 08:39 PM.

Vishu Kani signifies the Sun’s transit into the first Lunisolar month in the zodiac sign of Mesh or Mesha (Aries), marking the beginning of the new Lunisolar and harvest year. Several mythological tales are related to the celebration of Vishu Kani. Some believe Vishu is the day when Lord Krishna, the eighth incarnation of Lord Vishnu, killed a demon called Narakasura. Another belief is that Vishu Kani is celebrated with the return of Surya Dev or the Sun God. According to it, the demon King Ravana prevented the Sun God’s rising from the East. Since then, Vishu is celebrated with great zeal.

The Malayalam word “Kani” literally means “that which is seen first”, so “Vishukkani” means “that which is first sighted”. The traditional belief is that one’s future is a natural activity that involves one’s experiences. Therefore, people view Vishu as the first thing on the New Year so that they may have favorable and joyous experiences in their lives, starting from the first day of Vishu Kani.

Therefore, Vishu Kani is arranged with great care and precision to create a positive aura in the house.

Do you wish to invite prosperity in your home and office? Get online remedies from our Vastu Consultant and get ancient time tested solutions to remove any Vastu Dosh.

Vishu is celebrated with fanfare and vigor in Kerala. Vishukkani, the sighting of the auspicious arrangement of the idol at dawn on the day of Vishu,is considered to be the most integral part of the festival.

Let’s Usher A New Beginning And Banish All Our Worries. Happy Vishu Kani!