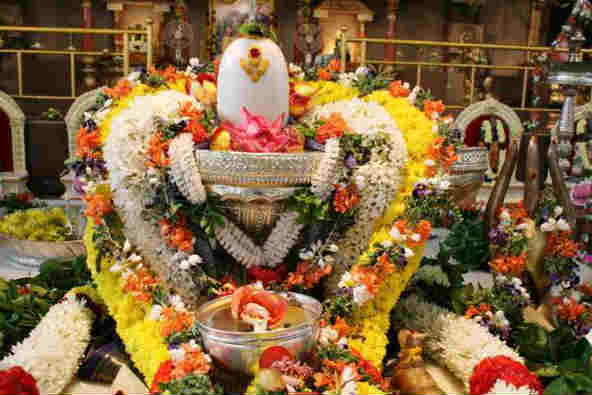 About Shravan Month
Shravan Month falls in the month of July-August in the Gregorian Calendar. It is considered as one of the most auspicious months in India. According to the lunar calendar, Shravan Month starts when the Sun enters zodiac sign Leo according to Western Astrology and New Moon Day . Devotees maintain austerity, observe strict fasts and pray to Lord Shiva in this holy month of Shravan.

Religious Significance:
Did you know it was Lord Shiva who consumed the poison ‘Halahala’ to save the mankind in Shravan Month?
During Samudra Manthan, the ocean produced lots of valuables such as gemstones, cows, bows, the Moon, conch etc. which were taken up by Gods and demons. Fourteen different gems emerged from the ocean and were divided amongst them. When the Ocean produced the deadliest poison called Halahala, all of them cringed back as it was too dangerous to destroy the universe. It was Shiva who decided to drink it to save the world. When Parvati saw him taking Halahala, she at once held his throat so that the poison wouldn’t go down. As a result, his throat turned blue and thus he was given the name Neelkantha.

Benefits of fasting for Lord Shiva on monday:
It is beleived that on who observes fast during Shravan month will be blessed with spiritual bliss. Rudra Abhishek and Homa on this month purifies your mind and body, offers peace, fulfills your desires and enlightens your soul. Are you facing serious troubles in your life? Have some sudden misfortunes that had drastic effects on your life? Then, it may all be because of Kalsarp Yoga. So, purchase the Kalsarp Yoga Nivarana Yantra.

A popular belief suggests that a woman who observes fast on Shravan Mondays (Somvars) is bestowed with desired partners. Fasting is believed to remove all the obstacles and difficulties from your path. You tend to improve physical and mental health that increases your willpower as well as sharpens your memory.Do you wish to achieve blessings of Lord Shiva and appease him. Then bring home the Crystal Shivling With Silverbase and the Maha Mrutanjay Yantra at an exclusive 10% off!

How to successfully observe fast in the Shravan month and enjoy well-being? Suggestions by Ganesha:

Don’ts: Avoid food that makes you feel heavy.Do not consume stale food.Spicy and oily food should be avoided .