Navratri 2019: Ways of celebration through out India 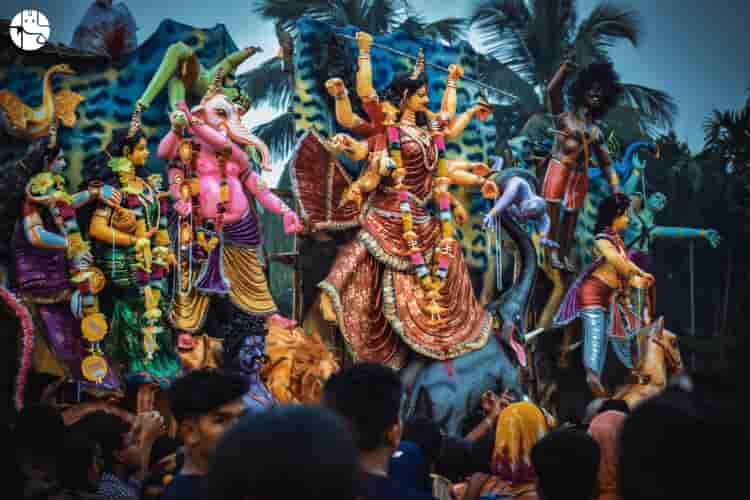 The auspicious nine days festival falls in the lunar month of Ashwin during autumn which probably comes in September or October. Navratri marks the end of Pitra Paksha or Shraaddh Paksha. Durga Puja 2019 or Navratri 2019 begins from 29 September. All nine days are dedicated to Goddess Durga and all her nine avatars.

Why do people celebrate Navratri?

The festival is celebrated to show respect to Goddess Durga for her victory over the buffalo demon Mahishasura.

Goddess Durga fought with demon Mahishasura for nine days and emerges as victorious over the demon. The celebration is for the victory of peace and dharma over the ego and evil.

The tenth day is celebrated as Vijayadashami or Dussehra!

The tenth day is celebrated as Vijayadashami or Dussehra where people celebrate the victory of Lord Rama over the demon Ravana.

How is Navratri celebrated?

In eastern and northeastern states of India, Navratri is celebrated as Durga Puja also called Durgotsava.

How is Navratri celebrated in the Western States of India?

Navratri in Western states is celebrated by placing the pot in a clean house. A lamp is lit inside the pot also Akhand Jyot that means the lamp should be kept lit for all nine days.

This ritual is called Ghatasthapana. Goddess Durga known for the power or shakti is worshipped for all nine days in her nine different avatars. On the tenth day, the pot is kept in a temple or immersed in the river.

People perform fast for nine days and avoid grains, onion and garlic for nine days. Grains are avoided as it is believed that they contain negative energy due to seasonal changes during that time.

Garba and Dandiya are performed for nine days on the songs of Goddess.

How is Navratri celebrated in the Northern States of India?

In North India, the nine-day festival is celebrated for the victory of Lord Rama over the devil Ravana. For nine days play of Ramlila is played on stages that depict the tale of Lord Rama according to Hindu Mythology epic book Ramayana.

People wear traditional clothes for all 10 days and perform fast. They offer prayers, read scriptures and recite stories of Ramayana.

How is Navratri celebrated in the Eastern and North-Eastern States of India?

In Eastern and North-eastern states of India, Durga Puja vidhi is done by placing Goddess Durga with Goddess Lakshmi, Goddess Saraswati, Lord Ganesha and Lord Kartikeya. Goddess Durga is considered as a mother, and other deities are her children.

Lord Shiva, the husband of Goddess Durga, is also placed besides Goddess Durga. The festival begins as Goddess Durga origins the battle against ego and evil to protect dharma and endeavour peace. The first day is called Mahalaya Durga Puja. On the sixth day, the Goddess is welcomed in houses, in pandals and temples.

Goddess Lakshmi and Goddess Saraswati are respected on seventh and eighth day, respectively. On the tenth day, the statue of Goddess Durga is emerged in the river along with a musical and colourful procession. The tenth day is called Vijayadashmi.

What is the significance of Navratri or Durga Puja?

Ask Your Personal Astrologer to know more about Navratri and Durga Puja and their timings.