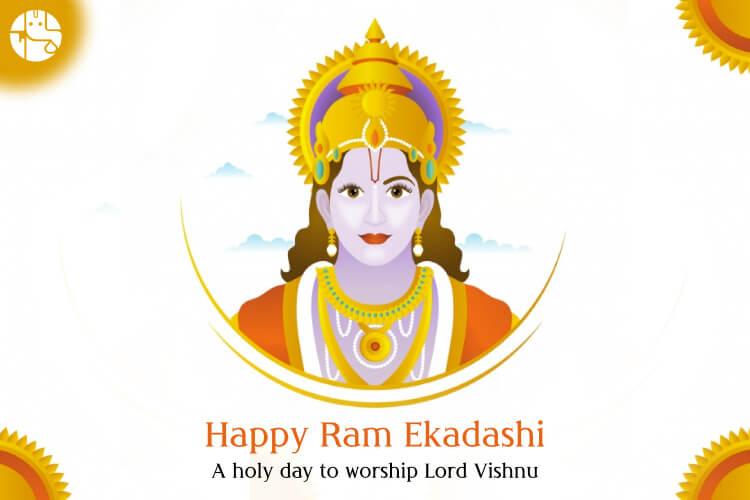 Rama Ekadashi fast is one of the important festivals as per the Hindu Tradition which falls on the eleven-day of Krishna Paksha. It is observed in the dark fortnight of the Moon. As per the Hindu culture, the day is of great significance, as on this day, it is believed that Kesahav Swaroop of Lord Vishnu is worshipped with Rama Swaroop of goddess Laxmi. This is considered as the last Ekadashi of Chaturmas. People who pay offerings to God archives wealth and prosperity in life.

According to the Hindu scripture like ‘Brahma-Vaivarta Purana’, it is a well-known conviction that one who observes fast on this auspicious day, is freed from all the sins. A person who hears the glories of Rama Ekadashi is believed to attain Salvation and reach the supreme abode of Sri Hari Vishnu. On this day, whosoever worship the Lord Vishnu with complete devotion, overpower all the hindrance and achieve immense success in his/her life. You can also hold our virtual Vishnu Puja and Laksmi Puja to get rid of all the sins and evil and bring wealth and prosperity in your life.

In earlier times, there was a king named Muchukunda. He was a very kind and sacred person. He used to observe fast every year on the day of Ekadashi, and the same rule had applied to the people of Kingdoms. His daughter Chandrabhaga who had a great faith Ekadashi Vrat. One day, she got married to Shoban, son of King Chandrasena. When Ekadashi came, he also observed the fast with his beloved. But the fast didn’t seem to work for him, and he died a premature death because of the starvation. Realising this, she got disheartened. On the other hand, Shobhan went to Deva-nagari On Mandarachal mountain from the influence of the fast, where he was assisted by Nymph. Once, king Muchukunda visited Mandarachal mountain, where he met his son-in-law and told everything to his daughter. Having heard this, she went to her beloved and lived happily thereafter.

Rama Ekadashi is one of the religious festivals of Indian tradition. The individual who hears the glories of Rama Ekadashi on this day attains salvation and reaches the supreme abode of Lord Vishnu.