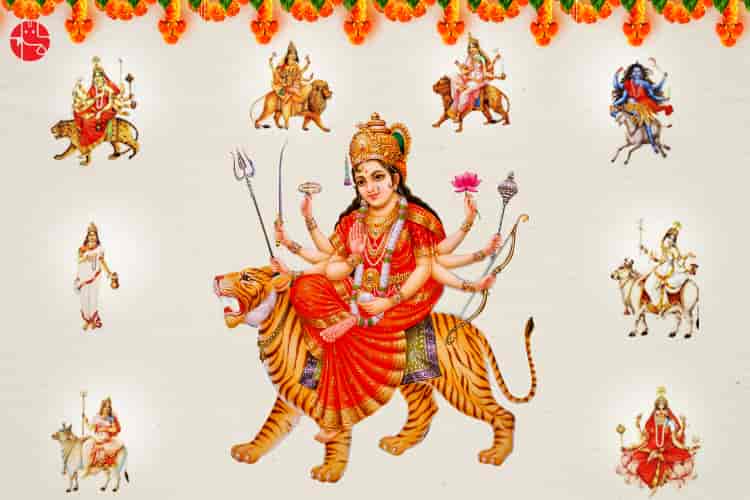 Nav Durga symbolizes nine forms Adi-shakti Goddess Durga. During Navratri, we awaken the energy aspect of Godheads in the personification of the universal mother Goddess Durga.

Navadurga is nine manifestations of the goddess Durga, especially worshipped during the Navratri where each of the nine avatars of Durga is venerated each night respectively.

Are you finding tough time in your career and business? Are you facing issues in your marriage life? Get remedial solutions for all kinds of problems.

What are the nine avatars of Maa Durga?

Though Scriptures differ in naming the nine incarnations, the most prevalent forms of Durga are:

1. Śailaputrī, known as Sati. She is considered to be the first manifestation of goddess Durga. She carries the Trishul and the lotus in her hands. Her vehicle is the Bull, Nandi.

2. Brahmachāriṇī, is two-armed, clad in white and carries a rudraksha mala and sacred Kamandalu. She is in a highly pious and peaceful form.

3. Chandraghaṇṭā bears the moon in her necklace. She is ten-armed and rides a tiger.

4. Kūṣmāṇḍa- Her name is made of three other words :“Ku + Ushma + Amanda “Ku” is “Little”, “Ushma” is “Warmth or Energy” and “Anda” is “Egg”, meaning the one who creates the universe as “Little Cosmic Egg” with the energy of Her divine smile.

5. Skanda-Mātā is the mother of Skanda, Kārttikeya. In this form, Durga is four-armed and rides on a lion. She carries a lotus, a Kamandalu and a bell. Her one hand is in blessing posture.

6. Kātyāyanī is the daughter of sage Kātyāyana, who incarnated to help the Devas. She is four-armed and carries a sword, shield and lotus. One hand is depicted as giving a blessing. She rides a lion.

7. Kālarātrī is black as night, destroyer of Kālī. She is four-armed and rides a donkey. She carries sword, trident and noose. She is cruel, dark and repulsive in appearance. She depicts the violent and dark side of Durga.

8. Mahāgaurī is the wife of Lord Shiva and is four-armed. She rides on a bull or a white elephant. She carries a Trishul and a Damaru. She is pure and is believed to have been in the form of Mata Parvati when she did penance to get Shiva as her husband. Purity is depicted in this form of Durga.

9. Siddhidātrī provides Siddhis and mystic powers. She is seated on a lotus and is four-armed. She holds a lotus, mace, discus and book. In this form, Durga removes ignorance and s provides the knowledge to realize.

What is the story of Navratri?

The most ubiquitous story known about Navratri is the victory of Goddess Durga over the buffalo Demon Mahishasura. Lord Brahma, the creator, granted Mahishasura the "buffalo demon," a boon that protected him from any man in the world. Empowered by this gift, Mahishasura set out to conquer heaven and the world and defeated Lord Indra.

On request of Indra, Lords Brahma, Vishnu and Shiva created Devi Durga, by combining their divine powers. Endowed with the trinity's shakti, Durga proved to be a formidable opponent who fought Mahisa for nine days, beheading him on the tenth day. The nine nights known as Navratri, symbolize the nine days of battle between Devi Durga and Mahishasura, while the tenth day, which is Vijayadashami-literally means the victorious tenth day of the conquest of good over evil.

Navratri is a Hindu festival celebrated by millions of devotees every year. It is devoted to Maa Durga and her dedicated worship. Navratri 2019 is from September 29 until October 7. Devotees fast and chant mantras taking names of all the nine avatars of Durga Mata. Maa Shakti, the primordial feminine energy of all creation in the Universe, is worshipped and the devotees benefit from her powerful blessings.

Ask any question to Indian Astrologer about performing puja rituals for Goddess Durga and get blessings from Goddess so that you turn out a winner against your enemies.