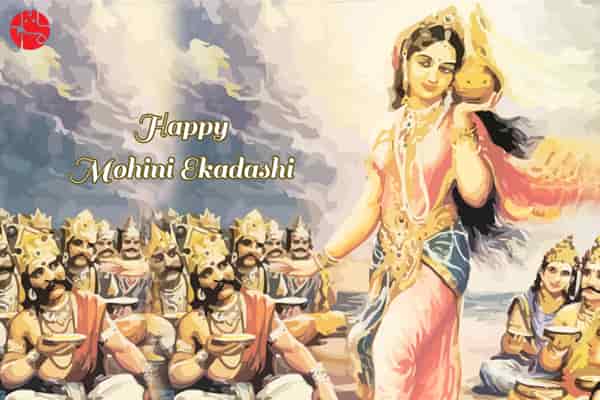 Mohini Ekadashi falls on the ekadashi (11th day) during the Shukla Paksha (the bright fortnight of moon) in the Hindu month of ‘Vaisakha’ that falls during the months of April-May, according to the Gregorian calendar. Mohini ekadashi is observed by all Hindus as it washes away all the sins committed by a person, including the sins commited in previous births. As per the Indian tradition, Mohini is the name given to the disguised form of Lord Vishnu, since the lord appeared in this form on the ekadashi tithi, the day began to be celebrated as ‘Mohini Ekadashi’ from then onwards. This Ekadashi is celebrated in the month of ‘Vaisakha’ in Northern India and adjoining regions, but as per the Tamil calendar, it falls during the month of ‘Chithirai’, in the ‘Jyestho’ month of the Bengali calendar and in the Malayalam calendar Mohini Ekadashi falls during the month of ‘Edava’. Hindu devotees observe this ekadashi to seek divine blessings for living a happy and prosperous life.

It is stated that observing the Mohini Ekadashi Vrat with full devotion can provide such good karmas or punya, which one can not achieve even by going on pilgrimages or rendering charity. The observer of the fast receives as many glories as achieved by donating a thousand cows in charity. The performer of this revered vrat achieves freedom from the continuous cycle of birth and death and attains salvation. Mohini Ekadashi holds huge significance in the Hindu mythology. One can also read the ‘Surya Purana’ to know more about the significance of Mohini Ekadashi.

Are you facing personal issues in life? Buy the Remedial Solutions for Personal Issues Report and get the much-needed help.

This year Mohini Ekadashi falls on May 22 Saturday.

As per Hindu mythology, it is said that on Mohini Ekadashi day Lord Vishnu had taken the form of Mohini. As per the tradition, when Amrit (Nectar) came out during the churning of the ocean, a dispute emerged between Devtas (demigods) and Daityas (demons) on who will consume it. Then Vishnu took the form of a beautiful woman, Mohini. Daityas kept on admiring the beauty of Mohini while she made the Devtas drink the Amrit. That is why this day is called Mohini Ekadashi. Mohini Ekadashi Vrat was also observed by Lord Shri Ram while searching Sita, and also by Yudhishthira during the Mahabharata period. As a result, they were relieved from all their sufferings. So, let us know about the Mohini Ekadashi Katha, Vrat and Vidhi.

According to the tradition, on the banks of river Saraswati, there was a place known as Bhadravati, which was ruled by Chandravanshi King Dhrutimaan. He was very religious and a devotee of Lord Vishnu. He had 5 sons named Sumana, Sadbuddhi, Medhavi, Sukruti and Dhrishtabuddhi. The king’s 5th son, Dhrishtabuddhi was a sinner. He indulged in immoral deeds with women, gambled, and also consumed meat & alcohol. Hence, the king got upset and abandoned him. Thereafter, Dhrishtabuddhi survived for few days by selling his ornaments and clothes. But thenceforth, he had to just wander around hungrily and thirstily. Subsequently, he resorted to robbery, and thus the king imprisoned him. Later on, Dhrishtabuddhi was driven out of the kingdom. Hence, he lived in a forest and killed birds & animals for his survival. Distressed with thirst and hunger, Dhrishtabuddhi arrived at the Ashram of Sage Kaundinya.

At that time, it was Vaishakha month and the Sage was bathing in river Ganga. Consequently, water droplets from Sage Kaundinya’s wet clothes splashed on Dhrishtabuddhi and he gained good sense. Then, he confessed all his guilt to the Sage, pleaded and requested him for a solution to attain salvation from his sins. Thus, Sage Kaundinya advised Dhrishtabuddhi to observe Ekadashi Vrat during the Shukla Paksha of Vaishakha month to cleanse all his misdeeds. Thenceforth, Dhrishtabuddhi observed Ekadashi Vrat and was able to wash out all his sins. Ultimately, he sat on Garuda bird and reached Vishnu Lok. It is believed that a person can attain freedom from materialism by observing Mohini Ekadashi Vrat. Further, a person who recites and listens to the significance of Mohini Ekadashi Vrat will receive same benefits as obtained by donating one thousand cows.

You can solve your business problems. Avail the Free 2021 Business Report.

The person observing Mohini Ekadashi Vrat should follow the rituals from the preceding night (i.e. 10th Lunar Night). He/she should wake up before sunrise, apply a paste of Til (Sesame) on the body and bath in pure water. Thereafter, you must install a Kalash(Pot) decorated with red cloth, and worship idols of Lord Vishnu & Shri Ram by lighting a lamp and incense sticks and offer fruits & flowers. Then, distribute ‘Prasad’ and give ‘Dakshina’ to Brahmins. Also, sing Bhajan-Kirtan (Devotional Songs) at night, and sleep near the God’s Idol.

Things To Be Avoided On Mohini Ekadashi: