Worship Maa Chandraghanta on the third day of Navratri 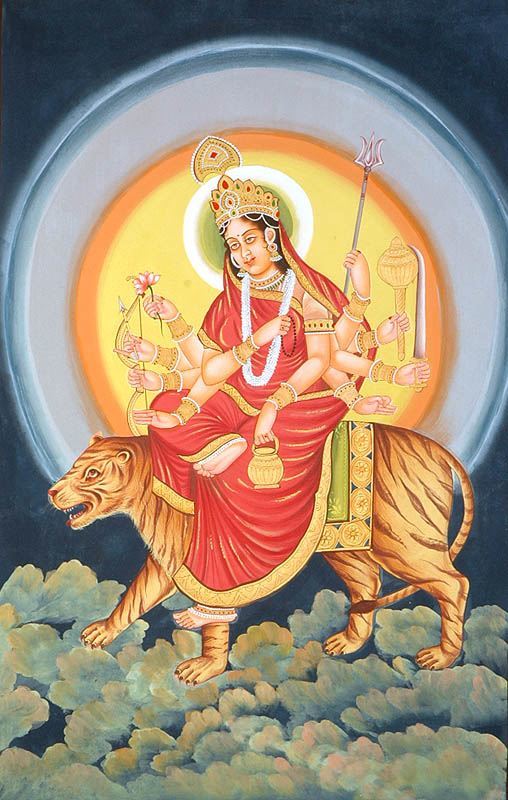 Maa Chandraghanta is the third manifestation of Devi Durga and is worshipped on the 3rd of Navratri. Since she has a Chandra or half moon, in the shape of a Ghanta (bell), on her forehead, she is addressed as Chandraghanta. A symbol of peace, serenity and prosperity, Maa Chandraghanta has three eyes and ten hands holding ten types of swords, weapons and arrows. She establishes justice and gives Her devotees the courage and strength to fight challenges.

Her appearance may be of a source of power which is always busy killing and suppressing the bad and wicked. However, for her devotees, Maa is serene, gentle and peaceful. By worshipping Maa Chrandraghanta, you will open the doors to great respect, fame and glory. Maa also helps you attain spiritual enlightenment. Her idol, which symbolises both beauty and bravery, gives you the strength the keep the negative energy away and repels all the troubles from your life.

You need to follow simple rituals to worship Goddess Chandraghanta. You should first worship all the Gods, Goddesses and Planets in the Kalash and then offer prayer to Lord Ganesha and Kartikeya and Goddess Saraswati, Lakshmi, Vijaya, Jaya – the family members of Goddess Durga. The pooja should be concluded by worshipping Goddess Chandraghanta followed by a heartfelt prayer to Lord Shiva and Lord Brahma.