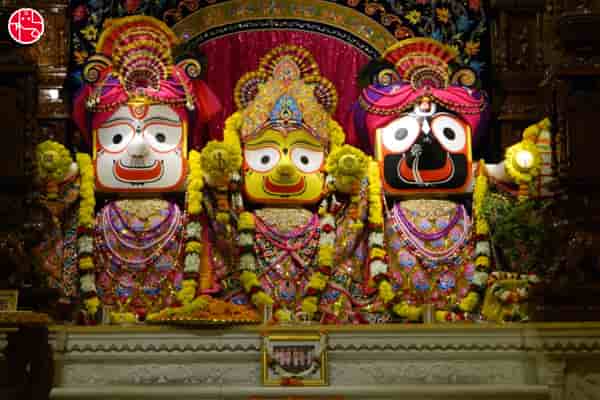 Jagannath Puri Rath Yatra is one of the biggest religious festivals of India. This festival will be celebrated on 20 June 2023 this year. One thing that makes this festival unique is the fact that the idols of three Hindu deities are taken out of their temples to meet their devotees in a colorful procession. In this article, you will get some interesting information about the story behind this festival and its importance.

Some mythological stories related to the beginning of the Rath Yatra tradition still reflect the socio-religious thinking and faith of the people of this region.

According to a legend, his maternal uncle Kansa invited him to Mathura to kill Lord Krishna and Balarama. He sent his general Akrura with the chariot to Gokul. On this invitation, Lord Krishna sat on the chariot with his brother Balarama, and left for Mathura. This was the beginning of the end of Kansa, hence the devotees celebrate this day of the departure of Krishna and Balarama to Mathura as Rath Yatra.

Devotees in Dwarka celebrate the day when Lord Krishna set out on a chariot to show the city’s beauty and splendor to elder brother Balarama and sister Subhadra.

According to another legend, once all the queens of Lord Krishna requested Mata Rohini to narrate an interesting romantic affair (Raas Leela) of Lord Krishna with the gopis. Mata Rohini felt that it would be inappropriate to hear such incidents of Subhadra, that is why she sent Subhadra away from there. But due to her curiosity, Subhadra remained there with Lord Krishna and Balarama in bodily form. When everyone was completely absorbed in the stories, then Devarshi Narada reached there, after seeing the three brothers and sisters together, he prayed that all three of them should see their devotees together in the same way, then the Lord gave them a boon. And since then all three reside in the Puri temple of Lord Jagannath forever.

Another story which is related to this Rath Yatra is such that after the death of Shri Krishna, when his last rites were being performed in Dwarka, the elder brother Balarama was very upset and he did not want to live without his younger brother. Is. He decided to kill himself and ran towards the sea. Subhadra was also behind him. At the same time, King Indradyumna of the eastern kingdom of India had a dream in which he saw the body of Lord Krishna floating on the Puri coast. He realized in the dream that he should build a huge temple in the city and give them a holy place by making wooden idols of Sri Krishna, Balarama and Subhadra. The ashes of Lord Krishna should be put in the hollow part of the back of his idol. King Indradyumna made this dream come true and he found the pieces of Shri Krishna’s ashes and brought them along with them. But now the question was who would make the idols of these three gods. It is believed that to overcome this dilemma, Vishwakarma, the chief architect of the gods, took the form of an old carpenter, went to the king and placed a condition in front of him that no one should disturb him while carving the idols and if anyone does so. , then they will disappear in that very moment. With the consent of the king the idols began to be made but after a few months Indradyumna could not stay away and he opened the door of the room where the construction work of the idols was going on. As the sculptor had already warned, they immediately disappeared. Now the king had no choice, so he sanctified the unfinished idols and placed the holy ashes of Lord Krishna in the hollow part of the idol and installed it in the temple. Since then every year a majestic procession is taken out in three huge chariots with idols of Lord Krishna, Balarama and Subhadra. The huge chariots are pulled by the devotees from Janakpur to the temple of Jagannath Puri with huge ropes. These three idols are replaced every 12 years and according to tradition the new idols are also kept incomplete.

Jagannath Puri Temple is one of the four most sacred temples of the four directions of India. Rameshwar in the south, Dwarka in the west and Badrinath in the Himalayas are considered the most sacred of the other three. The temple of Jagannath Puri is the only temple in the world in which the three brothers and sisters are seated together, Lord Krishna, Agraja Balarama and sister Subhadra.

Jagannath Yatra is special because it is the only festival in the world in which the Lord is taken out of the temple and a yatra is organized for the devotees to see, this festival is also the world’s largest Rath Yatra. Every year lakhs of devotees from all over the country and abroad come to Puri to see this Rath Yatra. Every year the kings of the dynasty that still resides in Puri sweep the road ahead of the chariot with a gold broom during the yatra, and three large 18-wheeled chariots adorned with the statues of these siblings make their way into huge crowds. . These chariots are considered architectural marvels, they are constructed from over 4,000 pieces of wood in the 42 days prior to the yatra, the craftsmen who built them have hereditary rights to build them. It is believed that it rains on the day this procession takes place.

The doors of the temple remain closed for a whole week from the first day of this yatra and no one is allowed inside. It is believed that after bathing in the sun with 108 pitchers of water, the deities get fever. After the fever subsides, he goes to his aunt’s house for his rest. Seeing the grandeur of this procession and the faith of the devotees in it, many foreigners also come to India to participate in this Rath Yatra.

Why are there two Rath Yatras and how are they connected? (2 jagannath rath yatra kyo)

Shri Krishna’s unfinished body was immersed in the sea in the city of Dwarka, Gujarat, which is situated on the west coast of India. And Puri is located in the state of Orissa in eastern India. Rath Yatras are taken out at both these places. It is believed that about 500 hundred years ago, Shri Sarangdasji, a Hindu saint and temple priest from a Hanuman temple in Gujarat arrived in Puri to offer prayers at the Jagannathan temple. While sleeping in the rest house of the temple, he dreamed of Lord Jagannath and he asked the saint to go back to Ahmedabad and install three idols of Jagannath, Balarama and Subhadra in the same place as in Puri. To fulfill his dream, those saints established the Jagannath temple in Ahmedabad. By doing so, the land from east to west was sanctified by the relics of Lord Krishna. About 142 years ago, a disciple of this temple founder Shri Narsinghdasji Maharaj started the Ahmedabad Rath Yatra. The deities ride on chariots drawn by elephants and humans, and rituals and worship in both these journeys make the journey of the deity worthwhile.

What happens to the chariots and elephants after the journey? (jagannath rath yatra ke baad kya hota hai)

At the end of this festival, the chariots are broken and their wood is used as fuel in the temple kitchen. The kitchen located in Jagannath Puri is believed to be the largest in the world with 56 dishes prepared every day and food prasad distributed to 2,000 to 200,000 people. The elephants are sent back to the land managed by the temple trust to roam free until the following year’s procession.