Know About Gayatri Jayanti 2023, Fill Your Life With Happiness 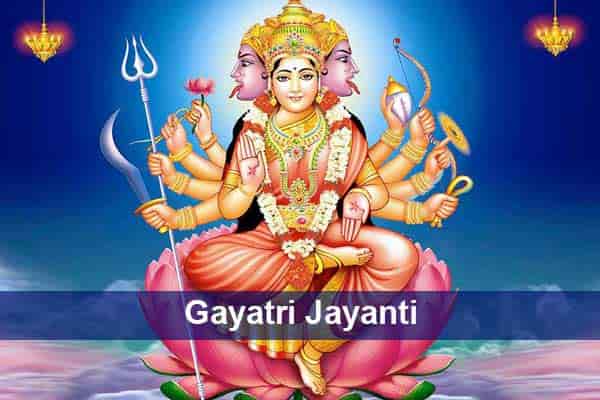 Indeed, Gayatri Jayanti a very significant festival in India. Since Vedas are central to Hinduism, and Gayatri Jayanti celebrates the birth of Goddess Gayatri, the mother Vedas, so Gayatri Jayanti has come to acquire lot of importance. In fact, Goddess Gayatri is considered as Brahma, Vishnu and Shiva in the Vedas. She is also believed to be the second consort of Lord Brahma. There is a belief that Goddess appeared in the form of knowledge on the 11th, Shukla Paksha in the month of Jyeshtha. This day is celebrated as Gayatri Jayanti. The knowledge which she represented was shared by sage Vishwamitra to the world, leading to the elimination of ignorance. This year Gayatri Jayanti falls on 31 May 2023, Wednesday.

On Gayatri Jayanti day, sage Vishwamitra first uttered Gayatri Mantra. Some people also believe that Goddess Gayatri, the Mother of Vedas, appeared on the earth on this day. As per the legends, Goddess Gayatri is the Supreme Goddess and is also worshipped as Mother Goddess. Devi Gayatri bestowed her devotees with all spiritual and worldly happiness. Are you facing career problems? Get them resolved, access our Career Ask A Question Report.

Devotees offer special prayers and pujas to Goddess Gayatri. People from different walks of life gather to offer their respect and devotion in the form of prayers and puja which are conducted by Pandits. Satsangs and Kirtans are organised on this day, and the Gayatri Mantra is chanted. If devotees chant the Gayatri mantra, then there is no need to chant any other mantra. One must recite Gayatri mantra thrice a day, preferably in the morning, afternoon and evening.

The Importance Of Gayatri Mantra, The Most Sacred Of Mantras

The supremacy of Gayatri Mantra is established in Hindu religious scriptures and Puranas. In fact the power of this mantra is well known since the Vedic times. It is believed that chanting the Gayatri mantra relieves the devotees from miseries and hardships of life. In fact, Gayatri mantra frees the individual from all the sins. It is supposed to end all the sufferings and fill our lives with joy and happiness.