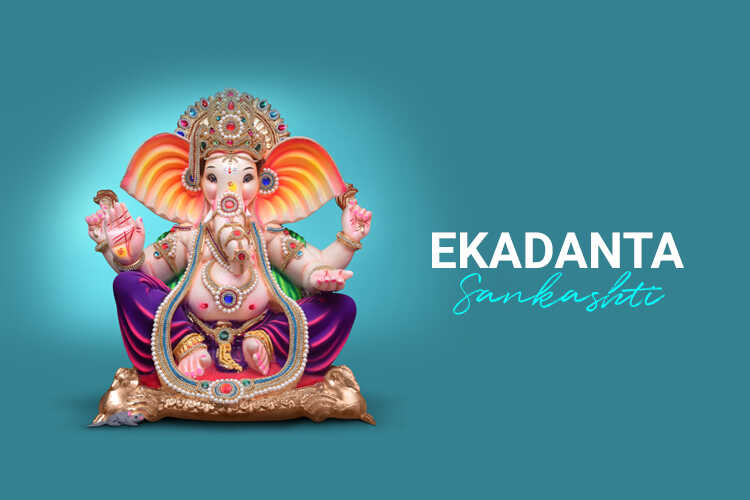 On this day, there is a special significance of sighting the moon. Devotees get up early in the morning, get ready and dedicate the day worshipping Lord Ganesha. Many devotees also keep fast on Ekadanta Sankashti Chaturthi wherein they are allowed to eat fruits.

The idol of Lord Ganesha is decorated with durva grass and fresh flowers. A lamp is lit and Vedic mantras are chanted. In the evening, Sankashti puja is performed dedicated to the moon or Chandra God.

Also, on this day, special Naivedya or Bhog is prepared, which includes the favorite dish of Lord Ganesha, Modak (a sweet made up of coconut and jaggery). Ganesha Aarti is performed and later the prasad is distributed among all devotees.

The devotees need to observe the full day fast from morning to evening and perform the puja Ganesh puja in the evening. Once the puja is finished, devotees see the moon and make the offering to the moon god. This offering primarily includes sandals paste, water, rice,and flowers. This is where devotees conclude the fast. If one is not able to do the complete fast, they can take the milk and fruits. The best aspect of this fasting is that people can either go for a full day or partial fasting depends on their preference and capability. Fasting observers can only consume fruits, vegetables, and roots of the plants. The basic diet on this day includes peanuts, potatoes, and sabudana khichdi.

The core benefit of this fasting is that it removes the various obstacles in life and provides progress and happiness. If people religiously follow the fast every year, it relieves them from their sins and gives them a place in the Svananda Lok which is an abode of Lord Ganesha.

The Story Behind EKadanta Sankashti Chaturthi

There was a sage called Bhrushundi who had an elephant trunk due to constant focus on Lord Ganesha. His devotion has made him powerful and people come to him for blessings. One day Lord Indra came to meet the sage and was about to return to his abode from celestial flight. As he left for the kingdom of Shursen, a sinner in that kingdom had its eye on Indra’s flight, hence, the flight landed on the land and lost its power due to the evil look.

King Shursen came running to Indra for his blessings and found his flight in such bad condition. Indra explained the whole issue to Shursen and also suggested the solution. He said that he needs to recharge the flight with some punya so that it starts flying once again. As the previous day was Sankashti Chaturthi, Indira needs anyone who has attained punya by observing the fast Sankashti Chaturthi. It would give Indra the merits and his flight will once again start flying. The soldiers searched throughout the kingdom and found no one who could have observed the fasting.

During that time, the soldiers of Lord Ganesha were carrying a sinner who passed away that morning in the abode of Lord Ganesha. Indira asked the reason behind carrying the sinner. In which, soldiers replied that the sinner had fallen ill due to not eating anything the whole day of Sankashti Chaturthi. It leads to the death of that sinner in the morning. In a way, that sinner has observed the fast unintentionally and attained a lot of merits to remove all the sins and earn a place in the abode of Lord Ganesha. During this whole time, the air that touched the body of the sinner also touched the plane which restored the working condition of flight.

Thus, if you observe the Ekadanta Sankashti Chaturthi 2022 fast, you will earn many benefits.

For personalized rituals for Sankashti Chaturthi based on your birth chart, consult our expert astrologers.

Hope all your dreams are fulfilled on this day, Happy Ekadanta Sankashti Chaturthi!