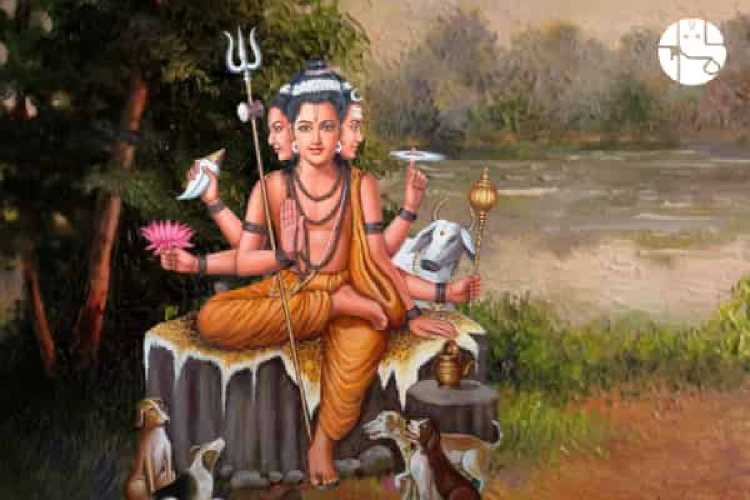 The important Hindu festival Dattatreya Jayanti is celebrated on the Full Moon Night (Purnamasi) of the Margashirsha (Agrahayana) month. It is also known as Datta Jayanti. In 2018, Dattatreya Jayanti will fall on 22nd December. It is believed that Lord Dattatreya was born on this day. As per the scriptures, Dattatrey symbolises the fusion of the three Gods in the Hindu male trinity (Trimurti) namely Brahma, Vishnu and Mahesh (Lord Shiva).

The Importance Of Lord Dattatreya

There are several prominent temples dedicated to Lord Dattatreya in South India. He is also a prominent deity in Maharashtra. In fact, the famous Datta Sampradaya rose on the cult of Dattatreya. Dattatreya has three heads and six arms. On Dattatreya Jayanti, his child form is worshipped. If one worships Lord Dattatreya with full devotion and fasts on Dattatreya Jayanti day, all his/her wants and wishes will get fulfilled. Are you confused in your profession? Buy the Career Ask A Question Report, get guided for future.

As per the Hindu tradition, Dattatreya was the son of the sage Atri and his wife, Anasuya. Anasuya was a very chaste and virtuous wife. She had performed severe Tapas (austerities) to get a son equal in character to Brahma, Vishnu and Shiva, i.e., the Hindu trinity. The Goddess trinity Saraswati, Lakshmi, and Parvati, who are the consorts of the male trinity, became jealous. They asked their husbands to test her virtuousness. Do you want to solve issues in relationships? Access the Relationships Ask Question: Detailed Advice Report.

Accordingly, the three Gods came to Anasuya in the guise of sadhus (ascetics) and asked her for alms. Anasuya became tense but soon regained her calm. Anasuya uttered a mantra and sprinkled water on the three sages, turning them into babies. She then breastfed them, as they wished. When Atri came back to his ashram (hermitage), Anasuya told him what had happened, which he had already seen through his psychic powers. He hugged the three babies and transformed them into a single baby with three heads and six arms.

As the three Gods did not return, their wives became anxious, and they went to Anasuya. The three goddesses begged her forgiveness and pleaded with her to send back their husbands. Anasuya accepted the request. Then the Trimurti appeared in their real form, before Atri and Anasuya, and blessed them with a son Dattatreya.

The 24 Gurus Of Lord Dattatreya:

1) Pigeon – A pair of pigeon went to save their young one who was caught in the net. However, the pair themselves got trapped in the net. Thus, over-attachment with anybody will lead to sorrow.
2) Honey Bee – Honey Bees create honey from the juice of flowers. However, the honey seller comes and takes away all the honey. This shows that one should not hold things more than what is required.
3) Lapwing Bird – Lapwing bird’s (it’s a slaty coloured bird that lives near water) legs are short and suited to moving in the water. Its beak is large and sharp. This bird holds food (parts of flesh) in its beak but doesn’t eat it. So, other strong birds snatch away its food. Thus, we learn not to hold things for long.
4) Wasp Insect – This insect teaches us to think good, because as we think, so we become good.
5) Patanga (Moth) – Patanga is attracted by fire, and it gets burnt in this process. Thus, we should not get involved in false attachment.
6) Bhaura (Blackbee) – Bhaura takes juice from various flowers. In the same way, we should take in good things from anywhere.
7) Silk Worm –After the silkworm gets closed in a cocoon and takes a new form, as per its thinking; in the same manner, we can focus our mind and become what we want.
8) Spider – God too creates a web like a spider and gets it eliminated when the time comes. Like spider weaves the web, then gets into it and finally swallow it, in the same way, God creates this universe called Maya (Illusion) and eventually swallows it.
9) Elephant – When the male elephant comes into contact with a female elephant, he gets in her influence. So, a renunciant or a disciplined man should stay away from women.
10) Deer – Deer gets lost into playful activities, fun & frolic. He fails to notice lion or another violent animal, who is on the prowl. We should also live without anxiety and stress.
11) Fish – Fish gets caught by people as it goes after the taste of food. Thus, we should not run after taste much.
12) Snake – Snake shows that any sannyasin should stay alone. At the same time, he should not stay in one place for a long time.
13) Python (Ajgar) – We should be contented with our life like a python. We should accept happily whatever comes our way.
14) Child – A child shows us that we should be free of worries and happy.
15) Pingla Prostitute (Vaishya) – Pingla Vaishya once thought that remembering God was important than earning money. That day she had a very peaceful sleep. Thus, money should not be given undue importance.
16) Unmarried Girl – Once Dattatrey saw an unmarried girl grinding dhan (rice), the noise from her bangles (chooris) were disturbing the guests who were sitting outside. Then the girl removed her bangles and just spared one in each hand. Thus we should have the courage to lead our lives on our own.
17) Sky – There should not be any attachment to one’s kingdom (country), time or circumstances.
18) Water – We should be pure like clear water.
19) Sun – Just like the same Sun is seen differently from varying angles, so also soul is one but seen differently in different individuals.
20) Air – Like wind is clean, whether it is at a good place or bad place, so we should not give up our goodness even when we are with bad people.
21) Ocean – We should stay dynamic and active in spite of ups and downs, just like the ocean.
22) Fire – Fire looks different in different situations, but it is the same fire; so also we should adapt to all types of environments.
23) Moon – The soul is beyond gain and loss. Even though Moon becomes smaller and larger, it retains the coolness and peace. So, we should be like Moon.
24) Earth – We learn the virtues of tolerance and selflessness for Earth. People do lot many damages to Earth, but it stays the same.