The Auspicious No Moon Night 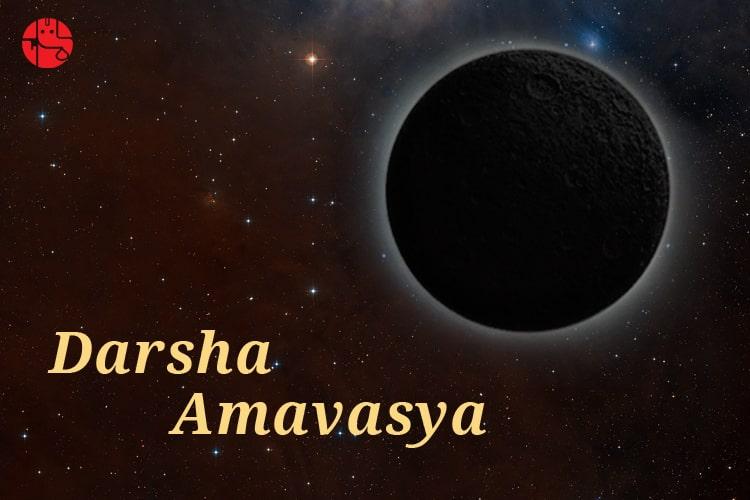 The traditional Hindu calendar defines Darsha Amavasya as the No Moon Night. The Moon is completely absent  at night on this day. It holds great importance for Hindus who follow the Lunar calendar and dedicate the day for the worship of Chandra Dev or the Moon God to seek his divine blessings.

Amavasya or Amavasi means a day when the moon is not visible in the sky. It is the first night of the first quarter of the Lunar month and the fifteenth day of the waning moon phase. It marks the end of the Krishna Paksha tithi.

If an Amavasya tithi starts after sunset and extends till night, it is observed as a No Moon Night and holds significance as Darsha Amavasya. Here are important dates and timings of occurrence of  Darsha Amavasya in 2021:

As per mythological facts the relevance of Darsha Amavasya is associated with the story of a Barhishadha born child Acchoda. The girl was deeply anguished as she longed for fatherly love which created a vacuum in her life. Barhishadhas are referred to as souls that survive on Somras (Som means happiness,peace and Ras means juice). Acchoda’s desire made her fall from heavens as she pleaded for help from her Pitru Loka souls who advised her to take birth on the Earth as the daughter of King Amavasi. Acchoda took birth as the king’s daughter and was very happy as her father was highly pious, noble and gave her all comforts of a princely life. To express her gratitude to the Holy souls of Pitru Loka, Acchoda arranged for a Pitru Puja for their Moksha. This was a shradh day which happened to fall on a No Moon night and was named after King Amavasi. It is since then that this day is religiously celebrated as Darsha Amavasya, a day to offer Shradh to deceased ancestors to mollify their souls and help them to lead towards salvation.

A person can gain multiple benefits on Darsha Amavasya . Here are a listed few :

Pearl is a gemstone which signifies the serenity and calmness of the Moon. Invest in the Best Quality Pearl and get it attuned through right Vedic procedures by the guidance of our astrologers.

Amavasya holds great significance in Hinduism. It is also referred to as the ‘New Moon Day’. On this day spirits are supposed to be more effective and therefore, one is advised to keep away from evil actions or negative thoughts on Amavasya. The day is also considered auspicious to perform Pitra Daan, Pitra Visarjan or the donation in the name of deceased ancestors.

Fasting is an integral part of Darsha Amavasya. Devotees follow the given fasting procedure:

Get detailed information about Darsha Amavasya Vrat observance from our Vedic experts who can progressively guide you to attain optimized benefits by fasting on this day.

Among all Amavasya, Darsha Amavasya is referred to as the most important in Hindu culture in accordance with the Lunar-Solar calendar. Here are some of the rituals performed on Darsha Amavasya.

Gain useful future insights from our team of experienced and renowned astrologers ready to assist you 24/7 with their accurate predictions and perfect remedial solutions. Contact them through calls and emails and get Your Personalized Solutions Now!