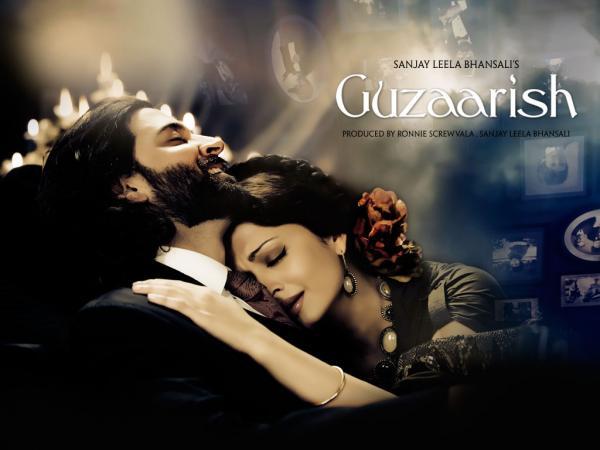 –Guzaarish?
A request… to die. How would the audience react if the heartthrob of the nation, Hrithik Roshan, wishes to die? The plot of Guzaarish revolves around the paraplegic Ethan Mascarenhas (played by Hrithik Roshan), the biggest magician of his times, who appeals to the court for mercy killing. Though the magician’s destiny plays an evil trick on him, leaving him crippled for life, he continues to spread the magic of love & hope, through a radio show. And the
hope is provided by none other than the very beautiful Sofia D’Souza (played by Aishwarya Rai Bachchan), who nurses him during his troubled days. Looking at the director’s past records, it is taken for granted that this film too ought to deal with a whirlpool of emotions, just like Khamoshi, Devdas or Black. As he puts it, ?I like topics that are unexplored and closer to life?. The surprise package is super-model Monikangana Dutta, in a pivotal role, as her
character is not much talked about.

With Aishwarya smoking in one of the scenes, the film has been in controversy. Will Hrithik & Ash cast their magic on the screen? Will the ‘Guzaarish’ be considered by audience? Ganesha finds out with the help of Vedic astrology.

Good luck and may Lord Ganesha bless the cast and crew of Guzaarish.